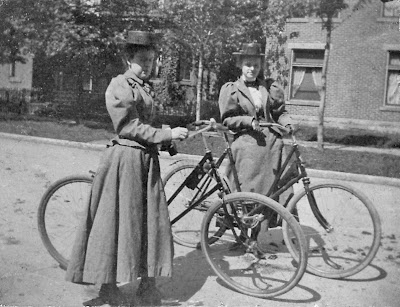 Photo found here.
Get a bicycle.  You will certainly not regret it, if you live.
--Mark Twain

When I see an adult on a bicycle, I do not despair for the future of the human race.
--H.G. Wells

Let me tell you what I think of bicycling. It has done more to emancipate women than anything else in the world. It gives a woman a feeling of freedom and self-reliance. I stand and rejoice every time I see a woman ride by on a wheel...the picture of free, untrammeled womanhood.
--Susan B. Anthony

The bicycle is the most civilized conveyance known to man. Other forms of transport grow daily more nightmarish. Only the bicycle remains pure in heart.
-- Iris Murdoch

When man invented the bicycle he reached the peak of his attainments.  Here was a machine of precision and balance for the convenience of man.  And (unlike subsequent inventions for man's convenience) the more he used it, the fitter his body became.  Here, for once, was a product of man's brain that was entirely beneficial to those who used it, and of no harm or irritation to others.  Progress should have stopped when man invented the bicycle.
-- Elizabeth West