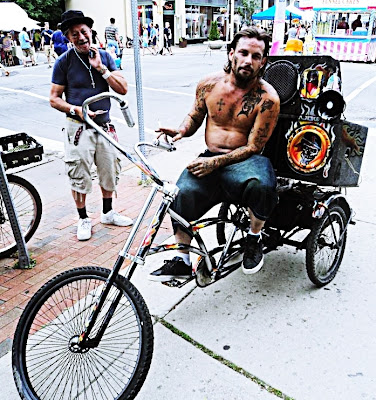 This past weekend was the Allentown Art Festival and the Allen West Festival here in Buffalo. If you've never visited our city, Allentown (click here and here) is a small village within a medium sized city (but getting smaller). I've heard people use the analogy that Allentown is our version of Greenwich Village, but I disagree for a couple reasons. Firstly, the size...the village in NYC is huge; the one in Bflo is teeny in comparison. But it's more than that...though it is artsy, a little shabby and dirty at times, and also gay, Allentown is distinctly Buffalo, and I like that. In short, it is about as eclectic a neighborhood can get in such a small radius...and the architecture can be breathtaking. Needless to say I've hung out in this neighborhood for the past few decades and have chose to work and live here for about the past ten years...it's easy to get inspired simply walking out my front door in the morning. OK, sorry for the bit of a tangent rant...on to the photos. I was late for work this past Saturday afternoon and had to shuffle through the festival to get there. Just as I was turning the corner, almost near where I work, I see this guy: Mike. He didn't call himself Tattooed Mike and his Boom Box Trike, I made that up (anyone who has the guts to have their face tattooed earns the word tattooed in front of their name in my opinion). But he did say his name was Mike. He was parked in front of Rick Cycle Shop. The festival was loud but the reason I looked in the direction of Mike was because his trike was even louder...boom, boom, boom, went his speakers. I was like a fly drawn to a candle. I didn't get a chance to talk to him too long or check to see how he powered the trike, but he did say he built it himself. When I told him I write a blog and asked if I could take his picture he said, "Sure boss," and hopped on the trike and struck the pose above. Thanks Mike...cool trike. 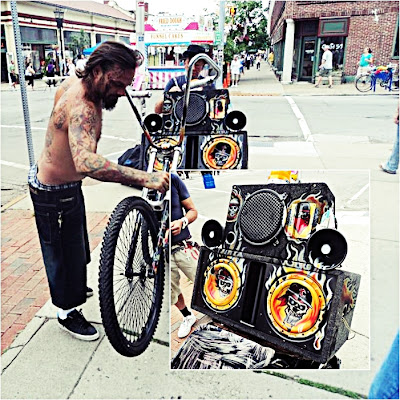