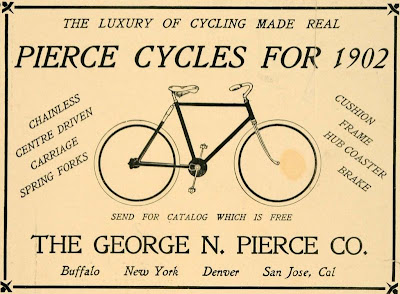 I am immensely interested in the history of the bicycle (among other things) and how it has helped transport people--literally and other ways--so for that reason it is only natural that I also find old bicycle advertisements of interest. Many people are aware that many of the major auto manufactures of today began as bicycle producers, and that the original car mechanics were bicycle mechanics (indeed even the Wright Brothers were auto mechanics before they built airplanes). But what some people may not be aware of--especially my fellow Buffalonians--is that at one time Buffalo was a large producer of bicycles (By 1900 the Buffalo City Directory listed 79 [bicycle] manufacturers, 136 dealers and repairers...from Buffalo Bicycles, by Carl F. Burgwardt), and that our little darling and one time claim to auto fame, the Pierce-Arrow Motor Car Company, began as a manufacture of state-of-the-art progressive bicycles of their day (click here, here, or here). Anyhow, I came across these two advertisements (here) from 1902 and thought they were interesting enough to share. Actually, what really caught my eye was the slogan on the advert above...The Luxury of Cycling Made Real. Nice. 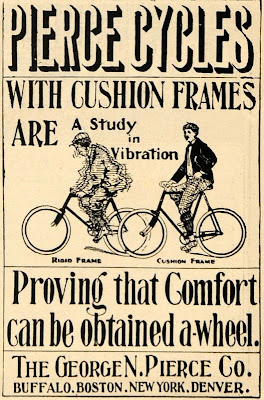