Saj, Marqouq, and Fatoush...Delicious Recipes to Keep the Kitchen (and the cook) Cool 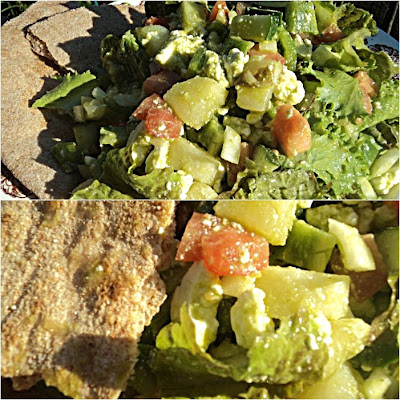 As many of you know I cook for a living. And as many people around the country and the world currently know: it is hot outside, really hot. So on my day off today the last thing I wanted to do, like any cook--professional or not--is heat up the kitchen. But, on the other hand, I love to cook and I truly enjoy good food, so the challenge is to make good food--including bread--and not heat up the kitchen. And this is easier than you may think.

As many of you also know about me, though I am born-and-bred American, by heritage I am half Lebanese-American. My Dad's family was from "the old country," specifically this village. Anyhow, for me to cook a meal like this I delved into my roots not only because I enjoy this food and think that the food of Lebanon is one of the great cuisines of the world, but also because on a hot day like this it makes the most sense to me. Many of the ingredients for the salad, but not all, were from my garden and still warm from the sun. And the bread was rolled flat and cooked in a cast iron skillet outside. But I'm jumping ahead.

Saj is not a recipe per se, but a style of cooking bread and also a piece of cooking equipment (click here or here for pictures). It's a sort of inverted wok, or domed griddle set over a fire on which the bread is baked. This can also be replicated in an oven with an inverted baking sheet. But I didn't want to turn on the oven and I didn't have a saj so I cooked it in a cast iron skillet on a propane burner in the backyard under the grapevines while I sipped wine. I used the simplest and most basic recipe for whole wheat bread (click here for a recipe). When I rolled the dough out I used a rolling pin that I inherited from my sitti (grandmother), who supposedly brought it with her through Ellis Island. The basic recipe makes a lot of flat bread--more than I needed--so I froze 2/3 of the dough raw (after it's first rising) for future use. The name of this flat bread in Lebanese Arabic is marqouq (or markook); still other times it may be referred to as khubz, which is simply an Arabic word for bread. Unfortunately I am not fluent and know only a smattering of words, but I'm pretty sure its name denotes the bread's flat shape (if there are any Arabic speakers reading this and you know please inform us). 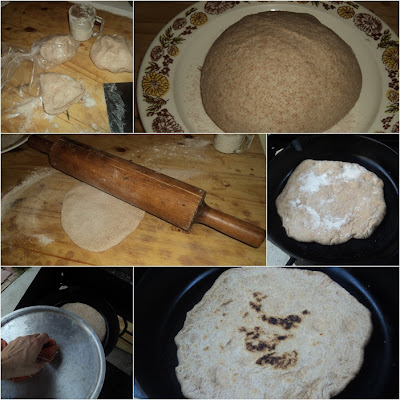 The salad is really a variation of fattoush, or a Middle Eastern bread salad (not unlike the Italian panzanella, I suppose). The salad's name--fatoush--is derived from the Arabic word, fattah (or fatteh) meaning crumb or crushed, making reference to their being torn pieces of bread in the salad. The variation I used for my meal tonight was that I ate the bread on the side (rather than part of the salad) and, of course, used it as a utensil for which to eat the salad. You can really put whatever you like into the salad; I used ingredients that were ripe in the garden and also so items I had in the fridge. Generally this is a vegetarian meal (as it was tonight), but it is also delicious with chicken or lamb. One of the distinguishing flavor characteristics about this salad is the na'na' or mint dressing. In the old days this was undoubtedly made by pounding the mint and garlic in a mortar and pestle (in the same way one would make pesto), but with the advent of the blender this dressing can be made with the push of a button. I planted mint a few years ago, and if you've ever done this you know that it grows--literally--like a weed. Needless to say I make this dressing frequently (the recipe is at the end of this post). While this dressing is of course excellent on salads, it is also delicious as a marinade or drizzled over grilled meat and fish. 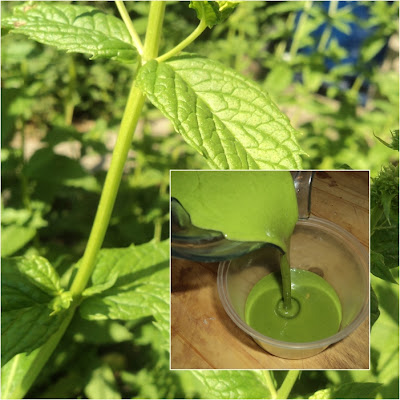 Combine all of the ingredients in a blender and puree until smooth and emulsified.

If you are interested in reading more on the cuisine of Lebanon, click here to read an article I wrote for Sally's Place many years ago. It's easy to see how long ago I wrote the article...not only does the picture of my bio show me with hair, and it states that I'm still married, but my son--who is 16 now--was an infant (he was so cute...gets his good looks from his mom, no doubt).
Email Post