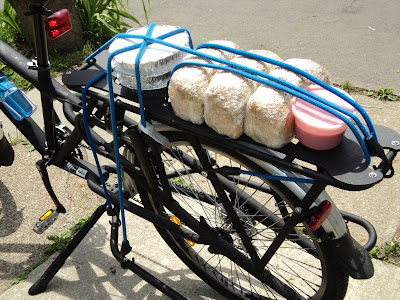 I came across an article in the New York Times today titled, The Dutch Way: Bicycles and Fresh Bread. Bread and bicycles are two of my favorite things so I'm sure you can picture me like a dog with a silent whistle...my ears perked right up. It's an article written by an American living in Amsterdam discussing the virtues of bicycling. It's really a good article (I think), and I hope there are plenty of Americans who read it. Here's an excerpt:

As an American who has been living here for several years, I am struck, every time I go home, by the way American cities remain manacled to the car. While Europe is dealing with congestion and greenhouse gas buildup by turning urban centers into pedestrian zones and finding innovative ways to combine driving with public transportation, many American cities are carving out more parking spaces. It’s all the more bewildering because America’s collapsing infrastructure would seem to cry out for new solutions.

The rest of the article is good as well and I have to say that I agree with most of it,but not this statement:

Cyclists can’t carry six bags of groceries; bulk buying is almost nonexistent. Instead of shopping for a week, people stop at the market daily. So the need for processed loaves that will last for days is gone. A result: good bread.

Some Americans can carry six bags of groceries on their bikes, do shop by the week, and still have good bread, really good bread. OK, I'm probably being nit-picky...the average American does not own a cargo bike or bake their own bread these days (hopefully that will change...even just a little). Anyhow, it is a really good article and worth your while to read (click here).
Email Post