I enjoy old advertisements...it gives a glimpse of life during certain periods, and I particularly like old bicycle adverts (these two were found here...there's many more if you're interested). What I found interesting about these two--despite their odd titles--was their subject matter...both are promoting the bicycle as a healthy way to travel; that they are good for you on many levels...including your body. And these are from 1892 and 1893. Both, I feel are just as relevant today as they were then (though I'm still not so sure about their titles for contemporary culture), but this is especially true for the bottom one. With today's energy issues, global warming, and the fact that there are so any overweight people in the world today--especially in the good ol' U.S. of A--it seems like there should be an ad promoting bicycle's benefits on every corner and in every magazine. Instead, we get commercials for new cars every five minutes on prime time television. Something is wrong. To read the bottom advert click it for a larger view; I'll get off my soapbox now. 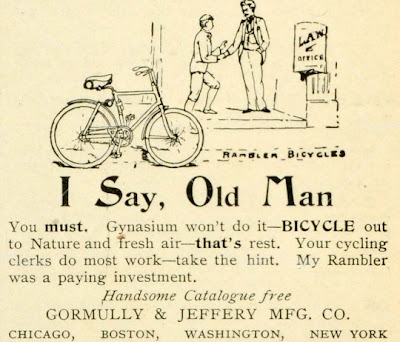 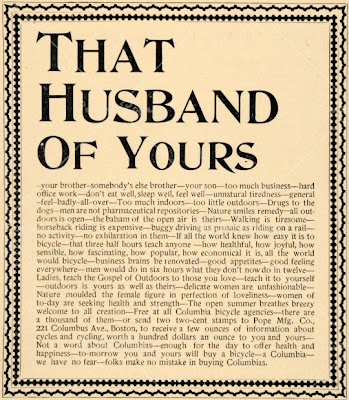