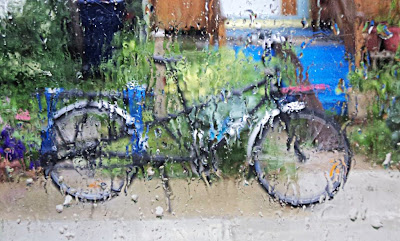 Photo was not edited; it was, ironically, taken from behind the window of a car in the rain.
I didn't intend on this, it just sort of happened (does that make it even more Zen?). The pool is closed this week for yearly maintenance (swimming is my primary exercise, besides biking, of course) and when I don't get physical exercise on a semi-daily basis I start feeling antsy and annoyed (and I'm likely annoying to be around). I had planned on going for a power ride (ie, fast) on the Mundo purely for aerobic exercise, and being out of work early today thought I'd fit in a quick yoga/meditation session. Anyhow, when I originally left work it was beautiful and sunny (the reason I thought of the bike ride), but after my meditation session it was starting to rain...not hard, just starting. I had a route planned in my head, which I know is about 5 miles, and thought the worst that could happen is I'd get wet...and get wet I did. About 1/2 mile into it the clouds opened up and it came down in buckets. I was already wet so I kept going. It was one of those rare times when being on a bike in the rain (my least favorite element to ride in...I'll take snow over rain any day) rather than fight it I surrendered to it. Maybe it was that I had just practiced a few basic asanas and followed it with meditation, or that my mantra was still at the forefront of my consciousness...but with the risk of sounding hokey, it was a spiritual experience. A good portion of my ride was along Lasalle Park, which runs along the eastern most edge of Lake Erie. I could see that it was a lake effect storm (regionalized) because while I was being pelted with rain I could see that the sun was splaying out in three directions across the lake. The scene through my rain-soaked eyes was beautiful...rain coming down in sheets but sunshine shimmering behind it as if the rain were a sort of veil. I felt as if I were getting washed far deeper than skin level. And I'll add this...if you ever want to get a good workout, a true aerobic workout, ride a really heavy bike into a really strong headwind during a really heavy rain storm. You'll get a workout and you'll also have no other option but to surrender to it.
Email Post