Who (or what) has been Eating My Corn? 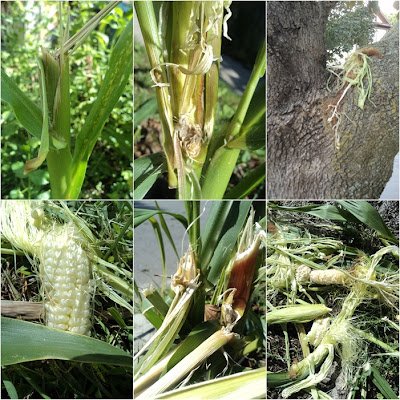 A few days ago I noticed one of my cornstalks was either knocked or pulled down, and it looked like it was partially eaten. It annoyed me but I brushed it off thinking it was some neighbor kids who pulled it out and a rat nibbled on the fallen stalk. Well, it's been going on for the past three nights now (I figured it wasn't neighbor kids after the first night), and it's gotten progressivly worse. I only grew about 20 stalks this year so it doesn't take much to wipe out the entire crop. At present there are two left...I figure they are goners tonight. Anyhow, a neighbor (not one of the kids; an adult) told me he saw a city raccoon down the street the other night; I hadn't seen one in the city in a while. Anyhow, as I was talking to him--and we were following the trail of corn debris across my front yard and another neighbors--he noticed some up in the tree. Yup, definitely a raccoon. I've grown a garden in the front yard for the past 9 years (here's one of my favorite pictures of the corn) and have endoured everything from rabbits, homeless people, and even giant tomato-eating slugs...but now raccoons. I have visions of me turning into Old (urban) Farmer Joe...sitting on my front porch with a glass of wine and a slingshot. I wonder what raccoon tastes like...

kfg said…
I don't bother planting corn anymore. I like raccoons, but I don't want to do that much work to feed them.

There's an old trick: plant your main field of corn, then about two weeks latter plant a couple rows around it with a space between.

The coons only check the corn in the outer rows to see if it's ready to eat; and those rows are two weeks behind the main plot. Gives you time to get yours in.

'Course you can't do that with only a couple dozen stalks, although it's not unheard of to plant a few corn stalks in order to harvest coon.
August 27, 2011 at 5:48 PM

Joe said…
KFG, I have been growing corn in my front yard for 9 years...this is the first time for this. A local coon must have finally discovered it. I may not plant it next year...we'll see. I came out of the house this morning for work and there was a squirrel sitting in the tree eating a corn cob...where the hell is that slingshot when need one.
August 29, 2011 at 7:55 PM