Things That Can Be Carried on a Bike (#356), a Recipe, and My Morning Commute 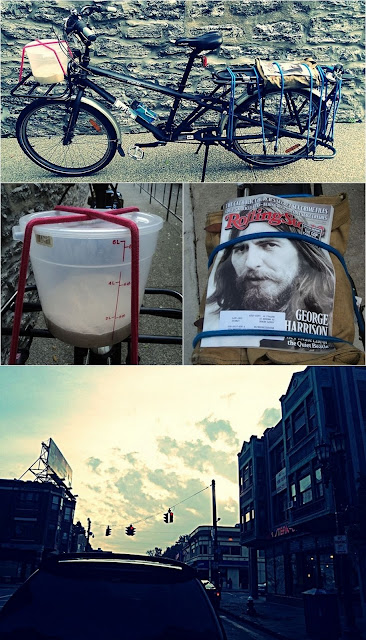 My Morning Commute: The lower of the above photos is the view I see from my handlebars on my morning commute nearly every morning; it's at this intersection. I use the word loosely because it's not much of a commute, per se, it's probably not quite a mile from my house each way. But this is something I've planned over the past decade...to have most everything within a few mile radius. But that photo is what I see almost every day, no matter what the weather may bring. This morning was beautiful...the sun was peeking from behind the clouds, it was unseasonably warm, the Bubble Man was doing his thing, and the smell of Cheerios permeated the air; as I waited at the light I marveled at this. And while I was waiting I could see the person in the vehicle in front of me was agitated and talking on a cell phone while bass blared from his auto's speakers. I was  really glad to be on a bicycle behind this person instead of in front of them. The light changed and the couple of cars ahead of me tried to speed away but on these narrow streets they can't so the person looked even more frustrated at the next stop light. And as I pedaled the short way to work I also marveled at the truly miraculous microcosm I was carrying on the front rack of my bike, what we call bread dough. And this brings me to the next topic.

A Quick Recipe: I used the recipe at the end of this post but also added a tablespoon of  vital wheat gluten and rolled the dough in cornmeal after shaping it. I also shaped the loaves into boules, rather than baking them in loaf pans (this is the reason I added the wheat gluten). Anyhow, to learn more about making this bread, click here, and to see plenty of pictures of bread being made, click here. 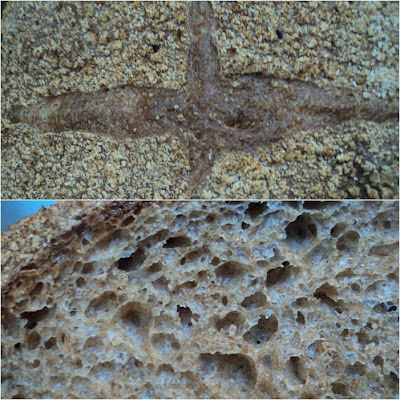 In one bowl make a preferment by combining 2 cups of whole wheat flour with 2/3 cups water and 2 teaspoons of instant yeast. Begin the autolyse in another bowl by combining 4 cups of whole wheat flour and 1 1⁄2 cups water. Stir each bowl just enough to combine the ingredients, taking care not to get yeast into the bowl with the autolyse. If the contents in either of the bowls need more water, add a small amount. Cover both bowls and allow to rest and ferment for 30-90 minutes, during which time the preferment will begin it’s job multiplying yeast and fermenting flour, and the autolyse will soak the grain, swelling the gluten.
After an hour or so, combine the ingredients from both bowls into the bowl of an upright mixer fitted with a dough hook. Add the honey, olive oil, salt, and 3 teaspoons of yeast (add the yeast and salt on opposite sides of the bowl). Knead the dough on medium speed for about 8 minutes. Place the dough in a lightly oiled container, cover it loosely, and allow to ferment for 1-2 hours, or until doubled in bulk. Deflate the dough and allow it to ferment an additional 30 minutes.
Turn the dough out onto a floured work surface and cut it into 2 or 3 pieces. Shape into loaves and place into lightly oiled pans. Loosely cover the loaves with plastic wrap and allow to ferment for 30-60 minutes, or until double in size and when gently touched with a fingertip an indentation remains.
Bake the breads for about 30-40 minutes, adding steam to the oven a few times (either with ice cubes or a spray bottle) and rotating the breads every ten minutes. The breads are done when they are dark brown and sound hollow when tapped upon. Remove the breads from their pans and allow them to cook on a wire rack for at least 10 minutes before slicing.