Things That Can Be Carried on a Bike (#353)...plus a comment and a short video 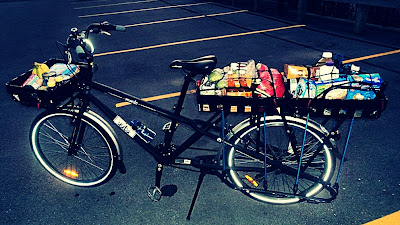 $119.78 in groceries from two separate stores (click the photo for a larger view).

I always enjoy the comments I get when I'm riding the Mundo, particularly when it's loaded. I'm sure other cargo bikers hear much of the same, especially here in North America where bikes like this are not that common. The most frequent comment--a question, really--is, did I build the bike. But there are plenty others. Tonight, for example, I had stopped to take this previous photo and I left the bike unattended as I stepped into the street to snap the picture. I saw a guy out of the corner of my eye walking up to the bike. I wasn't worried about theft because it was loaded as you see it and it would have been no easy task to zip away quickly (especially if you are unaccustomed to a bike like this). I took the photo and walked back to the bike. The guy says, "Man...that  is one big ass bike." Thanks, I told him...it's built to carry stuff. "I mean it," he said, "that is one big ass bike." He asked me more about it as he walked around inspecting it like it was an alien ship from another planet. Then, as he was squatting down looking at the rear carrier, he looks up at me and says again, only this time really emphasising his words, "Maaan, this is one...big...ass...bike." He then asked me if I would sell it. Umm..no, but thanks. I directed him to the Mundo website.

This next part--the below 20 second video clip--is sort of a response or continuation of yesterday's post (where I was feeling annoyed, saddened, and disgruntled being stuck in a pickup truck in a traffic jam). It's  just a short 20 second clip of my commute to the grocery store this evening (two stores, actually). After reading the previous post  and watching the below video I'm sure you can figure out which trip to the store I enjoyed more. But then again, I'm likely preaching to the choir.

Max said…
Amen to that, Joe. I rode to the grocery on Saturday, and found the parking lot absolutely gridlocked due to a music festival going on a block away. There were so many cars that people couldn't exit their spaces to let others parked.

Of course my parking space was easy breezy, right in front of the store. After shopping, I loaded up my go-getters and cooler. As I started rolling out, I passed a mom walking up with two tween/teen age boys. As I passed them I heard one of the boys say, "That's the solution."
September 12, 2011 at 1:00 AM