The King for How Long? 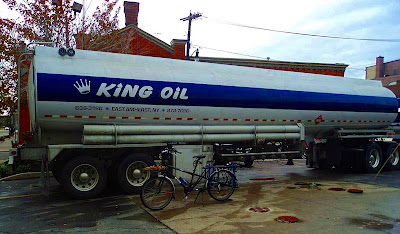 OK, though I am a bicycle/pedestrian advocate I try not to get too self-righteous because I still do drive a small pickup truck (infrequently...less frequently at times than others), but I couldn't help myself here. I was pedaling back to work to finish the second half of a split-shift when I came upon the above truck getting ready to fuel up the local gas/petrol station. I think the thing that bothered me was that it was called "King" oil. Anyhow, I saw the driver getting out of the truck and I coasted up to him and asked if I could take a few photos of my bike in front of his truck. He seemed a little surprised and responded, "I don't give a rat's ass what you do in front of my truck." OK, Mr. Happy, I thought to myself, and took a few shots; that's one of them above. Gas powered vehicles have been popular for what...something like the last 100 years, if that? Just a mere blip on our civilization's radar. Bikes predate the car and will likely outlast them (at least the gas-powered ones). So I ask you this rhetorical question...how long until the king oil is dethroned, and who is his predecessor, but more importantly...his successor?

Andy in Germany said…
"How long until the king oil is dethroned?"

Hopefully long enough that I can get myself and family prepared. All attempts to talk about the dethroning of King Oil have met with blank looks so far locally, so I suspect preparation involves relocation.

I'm working on that.

Who is his predecessor, but more importantly...his successor?

Good qustion. I just hope it's King Creative and King Local, rather than the false kings of Feudalísm, slavery and false security.
October 21, 2011 at 7:33 AM