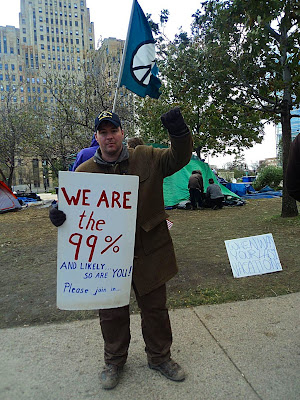 I've posted on Occupy Buffalo a couple times in the past week (click here and here) but after yesterday and last night I felt the need to mention this again. It's not that anything significant has happened in the last day or so, it's just that I am so surprised (and impressed) that people are still at it after the crazy weather we've had in the last 48 hours. The winds seemed to have calmed a bit now, but up until the past few hours we have been in the midst of a 2 day windstorm (wind gusts up to 55mph/88kph and sustained winds of 25mph/40kph). And in addition, yesterday it poured and poured and poured. Last night's low temperature was about 45F/7C) and these people are sleeping in tents. I thought of them as I crawled into my warm and dry bed last night. To be honest, I didn't expect anyone to stay there...but they did.

I spoke to a few people today, one of them--Michael Mottern--is pictured above. He's been there for 5 days, he told me. He also mentioned, almost immediately, that he was a Socialist, and that he's been blogging about Occupy Buffalo for Social Democrats USA. Another thing he told me--and he specifically asked me to mention this--was something that happened last night. It was night time (he didn't mention how late) when a truck pulled up and the driver got out dressed in a New York State Sheriff uniform. They initially thought there was a problem, but they were wrong...he just stopped by to drop off bottled water and food. He told them that he believed in what they were doing...and so do I.

Before I parted I asked Michael what it was like to sleep in a tent in Niagara Square last night. He paused a minute, then smiled and said plainly...cold and wet. Rock on Occupyers...thanks for having the courage and willpower to do this.

To see a map of the cities in North America that are currently involved in this movement, click here. 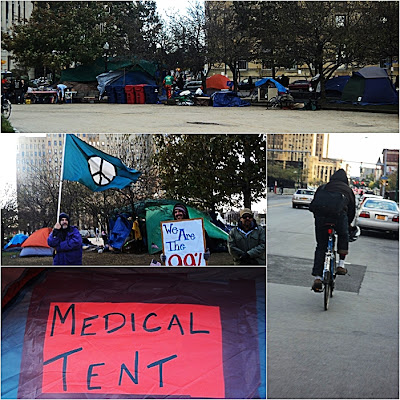