The Theology of Steve Jobs 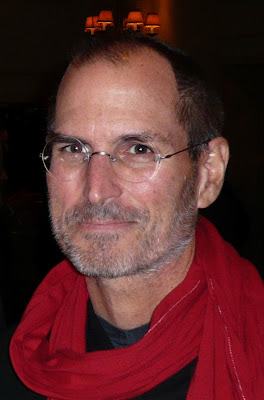 I wasn't going to write or post anything about Steve Jobs for a few reasons. One is that info regarding him, his life, and his recent transition, is currently proliferating not only the Internet but all forms of media. The other reason is that I didn't know him personally. But the more I thought about it the more I realized I owed him...because of the extent that personal computers have infiltrated my--like many people's--life. Not just with this and previous blogs, but with writing in general. Though I work full-time as a cook, I work part-time as a freelance writer...and this is something I could never have done without a computer. I really cannot imagine how writers did it before the advent of the PC. To be quite honest, I really don't believe I would have been published as many times or as often as I have if not for a computer; mostly because of my personal laziness...how much more work it would take to type, re-type, and edit without a computer. Anyhow, that's all I plan on saying, other than an open and official thank you to Mr. Jobs for pioneering the thing on which I now type these very words.

What really prompted me to post on Steve Jobs was an article I read today at the Washington Post bearing the same title as this posting. What's below is a portion of the story which was cut-and-paste; to read the entire article, click here.


“No one wants to die. Even people who want to go to heaven don’t want to die to get there. And yet death is the destination we all share. No one has ever escaped it. And that is as it should be, because death is very likely the single best invention of life. It is life’s change agent. It clears out the old to make way for the new. Right now the new is you, but someday not too long from now, you will gradually become the old and be cleared away. Sorry to be so dramatic, but it is quite true.
Your time is limited, so don’t waste it living someone else’s life. Don’t be trapped by dogma — which is living with the results of other people’s thinking. Don’t let the noise of others’ opinions drown out your own inner voice. And most important, have the courage to follow your heart and intuition. They somehow already know what you truly want to become. Everything else is secondary.”

Here's one last quote I read, and this is from President Barack Obama:


"The world has lost a visionary. And there may be no greater tribute to Steve's success than the fact that much of the world learned of his passing on a device he invented

Jobs was not an inventor. He was a marketer.

What he did is to push the development of computer products in the direction of things he wished to market. In that sense he was a visionary and his vision was somewhat different from that of others in the field.

The device that much of the world learned about his death on is called The Internet. That was written by Bill Joy in his "spare time" as a grad student. His famous motto is "The network is the computer," and so it is coming to pass. His company, Sun, built the computers to run The Internet.

What Jobs's vision gave us was an "end user delivery" device for The Internet that could be put in your pocket, not rest on a table.

In other words, what Jobs has done for your life is to fill it full of chippies driving around in Cadillac Escalades with their heads down busy texting instead of, ya know, looking where the hell they are going.

As for how we wrote back in the day, I once wrote a children's novel in a blue school notebook, with a ball point pen . . . while sitting on a reasonably isolated beach on the Pacific coast of Mexico.

While I wouldn't necessarily want to do that every day, I'm willing to at least give it another go. It weren't torture.
October 6, 2011 at 11:20 PM

Max said…
Hi Joe, That is one of my favorite quotes. I only wish I could consistently maintain that mentality.

As far as the comparatively trivial topic of computer history, KFG I think you are inaccurate in dismissing him to being a "marketer". At the very least he was an innovative designer who bridged the world of computer engineering with the day-to-day world of everyone else. Of course he was not the only one doing that, but he did it really well. Enough so that it motivated/ inspired/ forced other manufacturers to think in new ways.

I also don't think Jobs deserves to be blamed for all the "chippies" driving "Escalades" (or Prius', etc). I think the problem isn't the device, but the driver/user, and the rolling living room they are sitting in. Text messaging was around before the iPhone. So was the Walkman, the 8 track tape, the newspaper, lipstick. Come to think of it, foolish people predate all of those things. He didn't design/create a weapon, he designed communication devices.

And KFG, something tells me that Joe, the guy who grows his own food, bakes his own bread, cooks food for a living, uses a wood burning stove, also happens to know about the properties and use of paper and pen. Hell, I can even remember PENCILS! I know for me, as a photographer for 30 years, that digital does not necessarily equate to better, but I also know that I have a far more interesting world out there in terms of publishing, if I choose to do so. Jobs did not invent the internet, but he and his team changed how we use it.

Finally, I think Obama was referring not to the "internets", but to the iPads and iPhones, and all their inspired equivalents.

kfg said…
"I think Obama was referring not to the "internets", but to the iPads and iPhones"

Certainly. If I didn't understand that I wouldn't have written what I did.

"Jobs did not invent the internet, but he and his team changed how we use it."

Yes, that's what I gave credit for.

Joe said…
Hi Guys (kfg, I've always assumed you are a guy, but on this invisible and miraculous thing through which we find ourselves communicating one can never tell, so if you're not...my apologies). Anyhow, thanks to both of you for your comments and insight. I don't know if Steve Jobs invented the computer, the Internet, or anything for that matter (what I do know is that I don't really know). But also, I know that he was very instrumental--be it marketing, physical labor, whatever--in making them (computers and all the toys that come with them) accessible to the "average person" (whatever that is). And for that I thank him. And yes, like the media I tend to exaggerate sometimes...I of course wrote before I owned a computer, but they just made it exceedingly easier for me (though somehow I have less time because of them). My first machine, back in '93 I think, was a used IBM 8088...no hard-drive, just two huge floppies; one ran the program (off a gigantic floppy) and the other recorded the data (sometimes if the wind blew in the wrong direction data was erased). Initially I didn't trust computers...I didn't think they were "creative enough;" real artists wrote by hand, I thought. I would write in pencil and transcribe it onto a floppy; not sure if I had spellcheck...talk about tedious. When I would write for publication I would print it out on an old dot matrix printer (can still hear it...chicka, chicka, chicka) and either send it in the mail or hand deliver it on a bicycle. As we all know things--many things--have changed in the last 20 years; some good and some not-so-good. But because of the more advanced development of both the computer and the internet it has made my writing and getting published more efficient as well. I guess that's more specific what I was originally trying to say. Thanks again guys. Peace.
October 7, 2011 at 8:32 PM