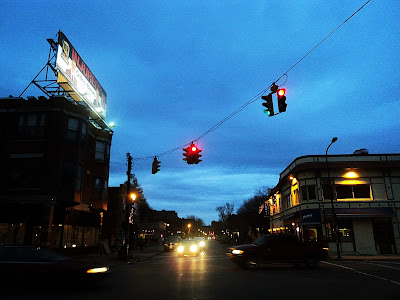 The above image is one I took while waiting for the traffic light to change earlier this evening; I was at the corner of Allen Street and Elmwood Avenue (here), which is not only one of my favorite intersections in our city but also the heart of the Allentown neighborhood and the one in which I reside. It was a little after 5pm and just getting dark. I had a crazy day at work (a really crazy day) and felt like going to the health club for a steam and swim (nothing like an endorphin rush to change your mood) and as I was waiting for the light to chang I was in awe at what a beautiful evening it was. It also felt so good to be out of the stuffy kitchen and on a bike in the fresh air. The high temp today was freakishly warm for this time of year...something like 72F/22C. And as I sat there watching cars pass before me I couldn't help but think that how glad I was to be on my bike and not confined in my truck; I was glad to be an active rider rather than a passive driver; I was glad to hear the sounds of the city rather than the 5 o'clock news on my radio (should I go on?). Anyhow, you get the picture. So I suppose if I had to say another reason that I like to ride a bike it would be that it is relaxing and enjoyable, not just a mode of transport (or a way to carry things). About an hour later I exited the health club just after it had just stopped raining...it had that damp feel and smell in the air that only happens after a rain. On my way home I stopped for a couple things for dinner at two different stores and pedaled and coasted refreshed from my steam and swim. There are so many reasons to ride a bike--some obvious and some not so much--and some of the reasons are likly personal to the rider, but for me one of the main reasons is that I enjoy it. I've posted the video titled A Reason to Ride on more than one occasion and thought about posting it again but opted not to (but you can see it here). Instead, on my way home I held out my camera and captured a few seconds of my evening commute. Nothing happens really; no excitement. It's just a middle-aged guy pedaling and coasting home with a few things for dinner strapped to his bike. But that's just it, I supposed...it's not really about anything other than daily life.