Blessed Are The Peacemakers (Five Quotes on Non-Violence) 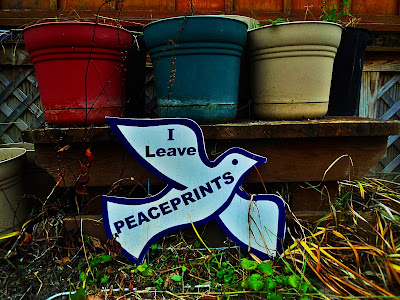 (To read about Sister Karen Klimczak, the originator of the peaceprints signs, click here.)

This is in response to the horrific incident that happened at the University of California at Davis very recently (to see videos and photos, click here or here). It is inconceivable to me that this actually happened. Whatever side of the fence you may sit in the Occupy Movement these protesters were non-violent, unarmed, and showing no aggression. Some people, I believe, are truly terrified of non-violent and non-resistant behavior. I also believe that it is ingrained in everyone of us, from pre-birth, that we are all connected and when you hurt one another you hurt each of us...the original truth. I really find it difficult to believe that these police who did this to these students had a good night's sleep last night. What has attracted me to the Occupy Movement from the very start is that it is a non-violent movement. Needing to clear my head this evening I walked down to the Occupy Buffalo site with my son (that's him pictured in the lower left). I was glad to see they are still there, and thought to myself as I snapped a few photos what a wonderful scene it was...these people so dedicated to a cause that they are basically living here--in the cold (snow will come soon enough)--and doing it peacefully. 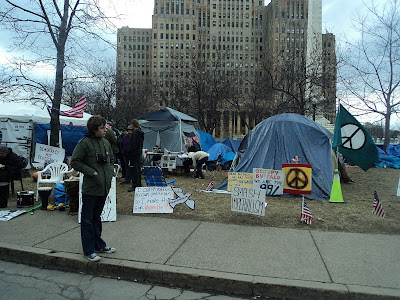 We who engage in nonviolent direct action are not the creators of tension. We merely bring to the surface the hidden tension that is already alive.
--Martin Luther King, Jr.

I had no idea history was being made. I was just tired of giving in.
--Rosa Parks

My religion is based on truth and non-violence. Truth is my God. Non-violence is the means of realizing Him.
--Mohandas Gandhi

Never do anything against conscience even if the state demands it.
--Albert Einstein

Blessed are the peacemakers, for they shall be called the children of God.
Jesus the Christ
Matthew 5:9

Some reading this may be a bit too young to remember the Tank Man of Tienanmen Square in 1989. He had the courage to stand before a line of moving tanks...unarmed, by himself, and looking to be carrying only a few groceries; he is pictured in the video below. It's rumored that the people talking to him, just before the video ends and before he left the square, were government officials. It's also rumored that he was executed shortly thereafter.


It's interesting--and sad--that three of the people from the above quotes were killed;' they are not alone, of course...some are so threatened by others who have the courage to stand their ground and not use violence as a method. To just stand knowing what is true. These to me are the real heroes we should look up to--not athletes who make way too much money, or other so-called celebrities--but people like this. And today, to me, the people who are occupying cities still--with the threat of violence from their own cities yet show no violence in return--these are real and living heroes.