Is this Ironic (or just circular)? 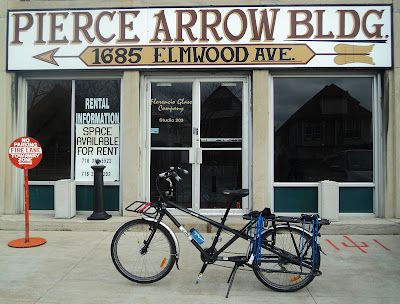 I think this picture is really interesting but can't wonder if it's not a bit ironic. I often ride past this building on my way to a store; it's the original Pierce Arrow building, which was once the factory of luxury cars by the same name. But what a lot of people don't realize is that this company, along with a lot of other automobile companies, began as a bicycle companie....and many of the original car mechanics were bicycle mechanics. Interestingly, at both of the websites for the Pierce Arrow Transportation Museum (click here or here) there are no mention of bicycles. According to Carl Burgwardt, in his book Buffalo’s Bicycles, in 1900 the Buffalo City Directory listed seventy-nine bicycle manufacturers and 136 dealers, and that it was because of the bicycle that road signs and rules came into existence. As aforementioned, on the websites of the transportation museum there are no images or links to bicycles. I've not yet been there yet (I really should go), but I can only hope that there are some bikes on display as well as the cars. Anyhow, with the current gas/car/environmental "crisis" I can only wonder what the future of transportation has in store...but I still can't help wonder if the above photo is not just a bit ironic.

To read a couple of stories I wrote in the past on the importance of bicycles, click here or here. 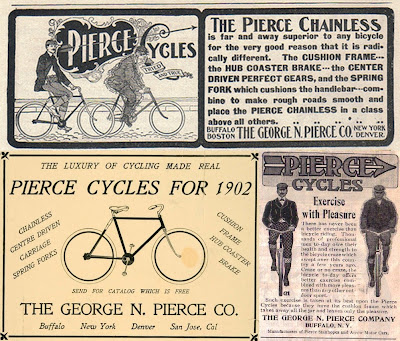