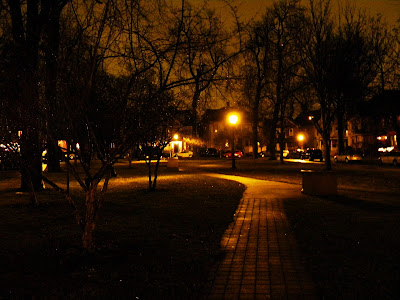 I almost didn't ride tonight...but I'm glad that I did. I had something I had to do and when I was about to leave the house it was raining (the element I least like to ride in). But I really didn't feel like driving so I hopped on the bike anyhow...only got mildly wet. But on my way home the weather was just perfect for this time of year. It had stopped raining and there was a slight mist in the air. And as I was coasting silently through the damp city streets I took a shortcut through teeny Arlington Park (pictured above)...the scene before me, I thought, was breathtaking. Why, I also thought, would I want to choose to be in a car rather than on a bike and miss this...so I snapped a few pictures. Shortly thereafter, as I was taking a few pictures of the Towne Restaurant (pictured below...a Buffalo institution), a guy--Jack (pictured below in front of the Mundo)--rode up on a Kogswell bicycle because he saw my Mundo parked beside me. After brief introductions we talked about our bikes for a bit (people with nice bikes love to talk about their bikes don't they). Turns out Jack is part of the Buffalo Lazy Randonneur Club, which I've been a Facebook friend for sometime but never met in person. Small world. Just one more encounter that would be nearly impossible to happen if I were in the confines of my truck zipping down the street. I really enjoy being an active participant in the environment around me rather than simply sitting passively on a car-couch. Ok, I'll stop going on about it. The remaining photo below was taken from the opposite side of Arlington park (click any photo for a larger view). Peace. 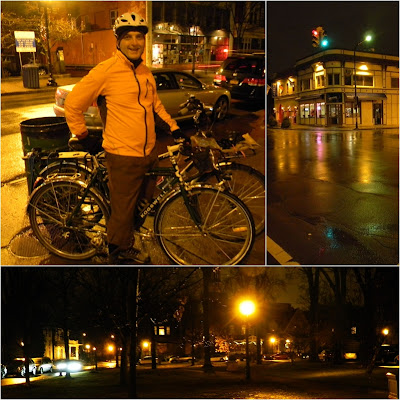 Jesse said…
Hey, small world indeed. I know Jack; I've gone to several of the seasonal Lazy Randonneur rides. Why not come out to the Tweed Ride next spring? I think you would like the vibe. The club is very egalitarian and welcoming to everyone who likes to ride.
November 29, 2011 at 11:00 PM