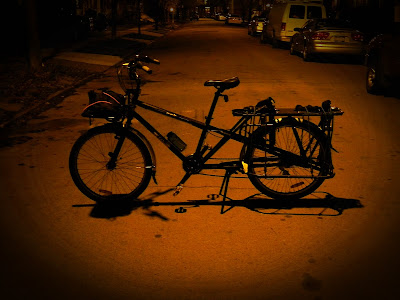 Sometimes I forget. Often actually. And it's easy to do because I'm on it everyday. What I'm talking about is my bike, or at east one of them. Specifically I am talking about the Mundo and how long it is (or at least how different it is from most other bikes); that it is a longtail and is just over 7ft or 2.1m. Mostly I think I forget about it because it rides so smoothly...like a "normal bike." I know that at least some of the readers of this blog ride longtails, box bikes, or other forms of cargo bikes, but in the city in which I live they are not very common. I get comments quite frequently and notice people looking as I ride by, but tonight the exclamation I received from two gents reminded me of this. I was on my way home and stopped at an intersection to snap a few photos. I hopped off the bike but left the head and tail lights on. I saw two guys coming down the sidewalk (pavements) looking at me and talking somewhat loudly and exaggerated. There's a fair amount of bars/cafes on that particular street so I didn't think much of it (thought they were just out having a good time). As they got closer I could see that they were definitely looking at me and talking about me. They were speaking Spanish, and I do not, so I couldn't understand what they were saying (but I did make out the words bicicleta grande, which I know means "big bike"). I stood there taking photos and acting like I didn't notice as they approached. Then, in English, one says, "What is that?" while looking at the bike. To make a long story short, they were very taken by the bike, inspected it thoroughly, and wanted a list of all the things I've carried on it (I told them to check this page). Anyhow, it made me remember how interesting and unique these bikes are, and it also made me proud to be riding one....and I just had to pass this little story on.
Email Post

Chainring said…
I put Christmas lights on my Xtracycle last week and this afternoon on my ride home I got a jawdropping stare from an elementary school girl as I rode past. Was it the lights? Or was it the monster bike.
November 28, 2011 at 11:49 PM

Joe said…
Chris...awesome. I checked out the pics at your blog...really cool. How do you keep them lit, with a battery. Was that something you devised yourself or did you purchase it/them. Let me know how the Slipnot Traction System works. Thanks for visiting.
November 29, 2011 at 4:40 PM