Stuffed French Toast is Anything but "Lost" 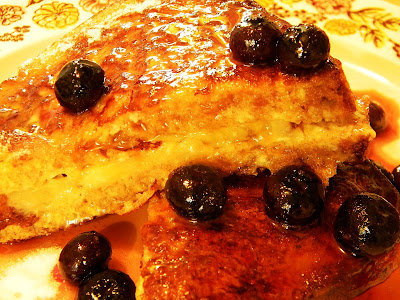 Pictured on this post is a breakfast I made for my son (and a friend) and it's his favorite...French Toast. I've posted numerous pictures and versions of this simple but delicious recipe in the past (click here), but what sets this one apart is that the toast is stuffed. As usual, I used homemade whole wheat bread (click here for a recipe) and made the syrup using a pineapple juice/sugar reduction into which I dropped a few blueberries just before serving (this adds not just flavor but also a bit of color to the syrup). I "stuffed" the bread with thin slices of ripe banana, and I use the word stuffed loosely because it it really more like an egg-dipped sandwich...slice the bread thinner than usual and dip it in an egg-mil mixture before making a sandwich with the fruit. And an important thing when cooking this is to do so over a very slow flame...you want the sandwich (toast) to heat through thoroughly not only to cook the raw egg but also this is what will hold it together. Lastly, what I meant by the title of this post--that this is anything but lost--is that it is really extravagant, and unlike it's humble origins. The original French toast in New Orleans/Creole patois was called Pain Purdue, or "lost bread"...implying that it was made with old or stale bread (as not to waste it). Well, this bread was neither old or stale--nor were any of the other ingredients--hence, it was anything but lost. 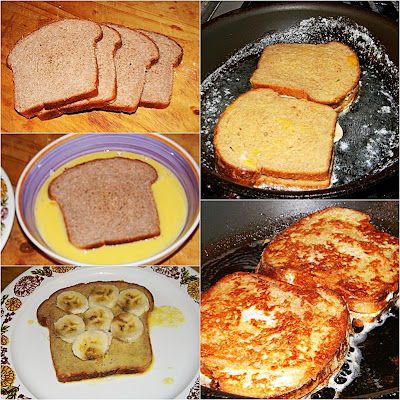 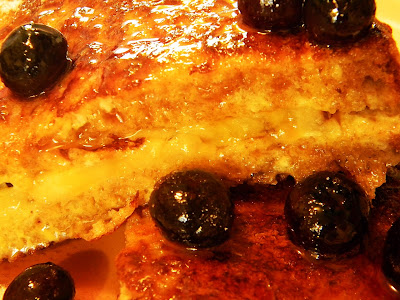