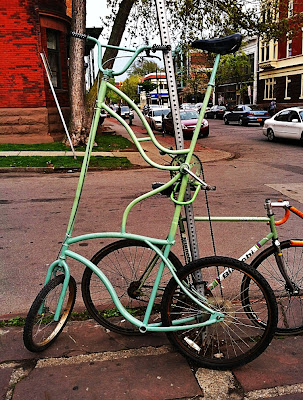 I rode past this tall bike today and did a u-turn to come back and take it's picture...that is one tall bike. I've profiled a tall bike builder previously on this blog, but haven't seen many of them around lately. As I was taking the bike's picture a young woman rode up. I commented on how tall the bike was, she smiled and rolled her eyes slightly and said that it was her boyfriend's bike, that he didn't build this one but he does build them. She told me his name but it escapes me at present. But it is a pretty interesting bike and I thought I'd share it...it sure is tall.