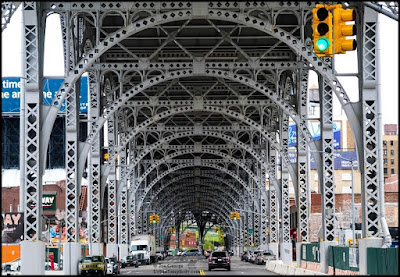 “Synchronicity takes the coincidence of events in space and time as meaning something more than mere chance, namely, a peculiar interdependence of objective events among themselves as well as with the subjective (psychic) states of the observer or observers.” ~ Carl Jung

I was in New York for an extended weekend last week. That’s not unusual, I try to get there at least once but usually twice a year. What is unusual is an idiosyncratic experience I had, and for reasons I am not entirely sure, feel the need to share it. So here it is.

As per usual with me these days, before I travel to NY or anywhere I jot down a few or more places I want to photograph. I’ll do a bit of research prior and then plan my days around it. Two of the places I wanted to photograph were the 125th Street Viaduct (pictured above) and Bethesda Terrace in Central Park (pictured below). I’m more of a “downtown guy” and hang out in the east or west village, so it was sort of interesting for me to travel that far uptown. 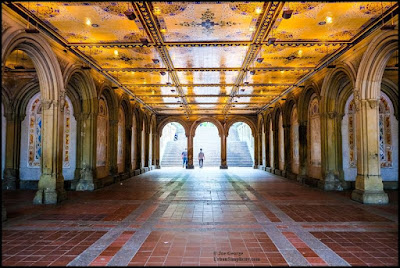 On my second day there I took the train up to 72nd Street and walked the short distance through the park to the terrace. It was beautiful, but being nice out and also a Saturday it was packed. I wanted to get a shot of of it with few or no people. So I decided to come back the following day. I also decided that I would not travel to 125th Street to photograph the viaduct simply because it took time and my time was somewhat limited (as I wanted to visit a few other locations).

So the next day after lunch I took the train from 14th Street, which is close to my hotel, and headed uptown. After the train started I could hear the conductor announce something but couldn’t make out what he was saying. The person next to me told me this train which is usually a local is now an express, which means they only make a few stops. The next stop was 42nd Street; there normally would have been 2 or 3 stops before that. No problem, I thought, as most trains—even express—seem to stop at 86th. Worst case scenario I’ll either hop a local the 14 blocks back or walk (which is something I love to do).  As it turns out the train didn’t stop at 86th; the next stop was 125th Street, the very place I had decided not to go. Okay then, I guess the Universe wants me to take a photo of the viaduct after all, so I did. Then I hopped another train back to 72nd Street, where it did stop this time. And this is where it gets a little strange.

I have to preface this next part with a few things. Firstly I’ve had some things that have been weighing heavy on me lately and was thinking about them as I walked. Secondly, and this is where some overt religious speak comes in, I also have to qualify the next few statements. I am a person of faith. Meaning I believe (know) that there is something greater than I. Name it whatever you like...God, Universe, Spirit, Divine; I use them all interchangeably. What I don’t believe is that God is an old white guy sitting up on a cloud looking down and judging. Quite the opposite, actually. My belief is that God/Universe/Spirit is all that there is...that we live within Its presence.

This said, I also consider myself a Christian. Meaning that I follow the teachings of Yeshua ben Yosef (Jesus the son of Joseph), the poor Jew from Nazareth who latter became known as Jesus the Christ. And this is where it gets a bit tricky for me. What I mean by this is that I question things. So many things. I’ll just say that I read the bible as metaphor more than anything, that it is meant as an inwardly spirit-pointing book to guide and change us. Reading it literally is where many problems arrive. These of course are simply my own humble opinions. Now I have to qualify these statements with a request...if you do not share the same views as I this is fine, but please don’t try to save or convert me or send me hate mail.

Anyhow, There I was walking down 72nd Street on a lovely warm NY spring evening and thinking about these things that were weighing heavy on me. In fact, I was praying. Not aloud, of course, but to myself. I wanted some things to change and I knew that I couldn’t do it alone, in many ways I was surrendering to the Divine as I walked down the street. As I walked I was speaking (mentally) the Universe and thinking how maybe it would be better if I prayed to Jesus like a “good Christian.” The problem was that I have problems with that. This is actually what I was thinking when as I walked and saw something etched in chalk which is pictured below. It stopped me in my tracks. “Are you fucking kidding me?” I questioned (aloud this time). Passersby looked at me as I repeated myself. 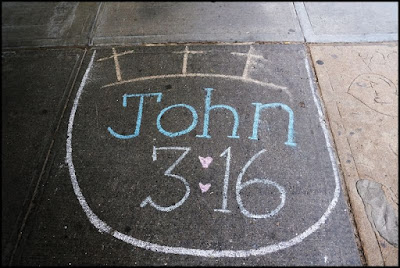 Now if you are not familiar with John 3:16, it is one of the most quoted bible passages, especially by evangelicals. This is why I have a problem with it. For me it sounds exclusive rather than inclusive to other faiths (or no faith) and this is where (one of) my problems lie.

“For God so loved the world that he gave his one and only Son, that whoever believes in him shall not perish but have eternal life.” ~John 3:16

So what’s to make of this? Is it just silly mumbojumbo? Maybe, but I do think there is something to it. At the time, as I do now, I felt the Spirit was sort of giving me a shake to wake me up and remind me that everything will be fine.

I relayed this story to a friend this past week and he commented how it’s not uncommon to see people write biblical passages around. True, I suppose, but what are the chances that I would be walking down a street in our country’s largest city when I saw this. That I came from an opposite direction because of the train mishap; I would have been on different part of the street and not seen this if not for the express train. Though more importantly, what are the chances of me coming across this while I was actually thinking the inverse of what this passage has to say? Slight at best. Anyhow, this is something that happened to me the other day which I felt compelled to share.

“Synchronicity: A meaningful coincidence of two or more events where something other than the probability of chance is involved.”
~ Carl Jung
Email Post