An Old Tavern and a Ghost Selfie... 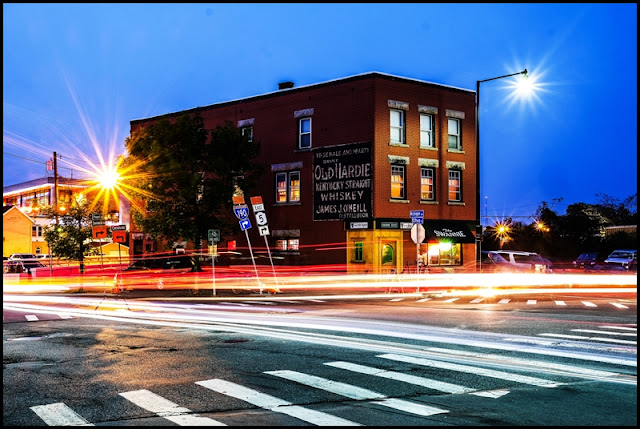 So had gone out for a ride to snap a few photos and have a couple beers tonight, as I'm apt to do in the nicer weather, and stopped at the Swannie house on the corner of Michigan and Ohio Streets, which is quite literally in the shadow of grain mills and the Michigan Street lift bridge. The Swannie house is the second oldest continually operating tavern in the City of Buffalo, founded as early as 1886 (to see a photo of it before the buildings next to it were gone click here). Anyhow, as I was having my beer I waited until the light was just right (because it's all about the light) and then went out across the street to set the camera on a tripod. This is a 90 second exposure, that and the amount of time the camera takes to process the photo gave me enough time to walk across the street and unlock my bike. Doing so I stood for about ten seconds so I would be in the photo (because things in motion--other than light--generally do not show in a long exposure). If you look close you can see a "ghost selfie" of me to the right of the streetlight in the photo. Why I personally think this is interesting is that the Civil War era house in which I have resided for nearly 20 years was once owned (the second owner of the house) by a man named Frederick Tornow who was not only an early proponent of bicycles in Buffalo but was also a photographer and would ride around and document the city both in words and photos. In fact there is a photo of him in front of his house (now my house) standing with his bicycle in 1886, the year the Swannie house was founded (click here to see the photo). I can't help but think that he may have leaned on the same bar as I had tonight only 133 years ago. And this is what I was thinking as I stood for ten seconds in this 90 second exposure photo this evening.
Email Post