An Open Letter to Cyndi 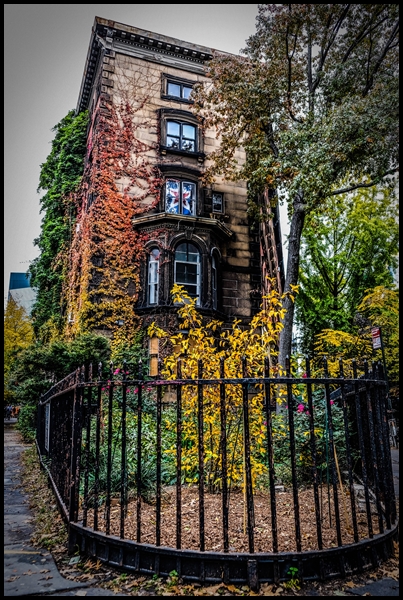 Some months ago, out of the blue, you posted comments on my Facebook page that were nothing short of a personal attack, one that questioned the very character of me as a person. When I first saw this I was in NYC for the weekend taking photos and one of them is the photo pictured above. It is the corner of 10th and Stuyvesant in the East Village. With the photo I also posted what I thought was an amusing story that happened while I was taking it. The original post is still up; my story and your comments can be viewed here but you’d have to be a Facebook friend to access it. It is because of you, in fact, that after more than ten years on social media with all my pages wide open, as I’ve nothing to hide, I made my personal page private. Why you chose this particular post to make your comments I’ll likely never know.

It was a Sunday morning and when I woke and checked my page I saw that someone I didn’t know had made comments so I looked. And when I did they were so hurtful I thought it was a joke, but it wasn’t. I posted a defensive comment and you were there waiting to add more. But then before I could make additional comments your Facebook profile went blank; you either deleted it or changed the name or something, it was inaccessible and you were gone.

This, I think, is what bothered me the most. You made some assumptions about me because of your own personal views but really did not know me. Nor did I know you and did not have the opportunity to respond. And the reason I am responding now is twofold, one is that I came across the above photo last week and it stirred up these same negative feelings, and then two days later your identity became known to me. Then it made perfect sense why you commented. In your comments you wrote with such pseudo-authority as if I should have known you, and you even stated at one point, “You obviously don’t know who I am,” and I didn’t. But now I do so I am responding. You made assumptions about me that were highly personal but even more so not accurate. For this reason this is not just an open letter but a rebuttal.

I’ll divide this into a few sections. The first being your opening comments where you told me about your education and how you paid for it and then went on to degrade me for opening a GoFundMe page to help pay for my own tuition. These comments, I am convinced had no other intention than to hurt me and had nothing to do with what prompted you to initially comment. You did your job...they hurt.

I did open a GoFundMe page (which I will tell you why later in this letter) and had intended on keeping it up for a couple weeks or a month to raise enough money for the pending semester. When I linked the page to my social media pages donations literally came in within seconds. What I thought would take weeks or a month took less than 24 hours. The outpouring of love from people I knew (some who I hadn’t seen in decades) and also people I didn’t know was incredible. I know exactly who donated because each time a new donation came in I said a prayer of thanks and wrote down their name. I still have the list which sits on my prayer/meditation table. Opening the GoFundMe page was an incredibly difficult thing for me to do as I had never asked for anything in my entire life and have worked for everything I have done and accomplished. So yes, I did open a GoFundMe page to aid in my tuition; I did not “panhandle” as you commented.

Next I will address your many questions and suggestions of things I should be doing with the homeless instead of posting their photo and telling their stories, which you say I do simply to “feed my ego.” You suggested giving them a pair of boots, for example, and also to “go out and be good in someone’s life.” My relation with the homeless and downtrodden is so entwined in my life this will be difficult to tell without getting too lengthy or personal, but I’ll do my best. And to do this I have to begin in my childhood.

My family was poor while I and my three sisters were growing up but I didn’t know it because there was always food on the table and presents under the tree at Christmas; my father worked two or three jobs at a time and my mom worked full time while raising four kids. We were raised in a public housing project on Buffalo’s East Side. This, I’m convinced, is where I get my strong work ethic. These early years, I also believe, are where my affinity for the less-than-fortunate was instilled in me. This was also around the time I saw my first homeless person; I was probably around 10 or 11 years old. Walking to school and passing under an overpass I saw a man covered in cardboard and blankets. Spray painted on the wall which he lay next to were the words, “Smile, God Loves You!” It is an image I’ll never forget. I had never seen a homeless person except for caricatures of them in cartoons; the year prior I had dressed as a “hobo” for Halloween because I thought it was funny. After seeing this man I no longer thought it was funny and never dressed as a hobo again.

The year after this and then 5 years later—when I was 12 and 17—first my dad and then my mom passed away. By the time I was 17 I was almost 30. I have been working full time since I have been 16 and 1 week old, and for the first time in many years am only working 1 single job (so I can complete my studies; but more on this in a minute).

To digress for a moment, and as I said I would mention how I came to the point of opening a GoFundMe account, it was only 4 or 5 short years later that I applied to the Culinary Institute of America and was surprised when was accepted. This I paid for myself. At the time the tuition was about $30,000 (which in today’s dollars equals about $70, 000).

After working more than 30 years in the restaurant industry, mostly as chef with many accolades (which I won’t mention lest you think I am feeding my ego), when I turned 50, the age which neither of my parents saw, I wanted to do something to honor both them and myself, so after some thought and contemplation I applied to and was accepted at One Spirit Interfaith Seminary in NYC. Somehow, while working full-time as chef, I traveled to NYC 22 times in 24 months and was ordained in the spring of 2014. Between the travel and tuition I spent more than $20,000 and was deep in debt. So working full-time as chef I picked up a second job at a shelter for battered woman and their children. I managed to pay off the debt in a few years.

Shortly thereafter I enrolled in a spiritual counseling online course which cost about $4000. The time-frame for the course was 3 years; I completed all the coursework in 13 months and paid for it as I went. Though this was difficult it is this next part that is what pushed me to start my GoFundMe page; I enrolled in SUNY Empire State College to pursue a bachelors degree while at the same time taking a new job. The job you know well.

At best guess the BA degree will probably cost more than $30,000; at present I am just 2 classes short of completion but $15,000 in debt. That alone is not what pushed me to open the GoFundMe page. After a lifetime of working in private country clubs and white tablecloth restaurants I wanted to work with the homeless full-time. So when my current job opened up I created a very basic resume as not to seem too over-qualified and applied. Eventually I was hired. This job is just one more step in my current path, to quote the late theologian Henri Nouwen, of voluntary downward mobility.

By accepting my current position I took an enormous pay cut; in take-home pay this equals $250 a week or $1000 a month. For someone who was just making it as it was, this is huge. To be honest, even without college tuition my current monthly expenses exceed my monthly income. I am not only in debt I am going further into debt every single week and am not sure what the future holds. Anyhow, discussing this with a friend they suggested the GoFundMe page, and I researched it and saw others requesting donations for tuition assistance. So this was the reason I did it. It was not an easy thing to do, nor it is easy to discuss now. This is why that section of your personal attack on me is particularly hurtful.

Okay, I realize that I am getting lengthy here so I will summarize a few things regarding my final thoughts on my relation with the homeless and downtrodden. Really this can be told in a simple tale that happened recently. A former sous chef of mine who had moved back to Italy with his family was in town and contacted me. We hadn’t seen each other in 20 years and went out for drinks. In the course of conversation he told me what he remembered most about me, besides cooking, was how well I treated the dishwashers. While some staff barely spoke to them I would greet them personally each day, ask if they had enough food, how their children were doing, and usually send home boxes of food so they could feed their children.

There are so many other things to tell. These I have never mentioned to anyone so it didn't seem like I was “feeding my ego.” Twice I’ve actually slept on the street to experience what it was like to be homeless; once in the winter and once in the summer; neither time I made it the full night. In the winter I didn’t last the night because I thought I would die, and in the summer I had to defecate so retreated to my home bathroom (something people don’t often think of regarding the homeless). Throughout the years I have given money, purchased meals, given the hat off my bald head, scarf from my neck, and gloves off my hands to the homeless. But none of this I have ever mentioned as not to glorify myself. You also had mentioned my possible breach of confidentiality. This like all of your inaccuracies about me is not true as I have never nor will I ever post words, photos, or any other information about a client who I serve.

You see, Cyndi, this is not about you or me. The posts that you refer to are meant to be a vehicle to bring awareness to the plight of the homeless. Social media is a very powerful platform to post good rather than negativity or argue with people you have never met. The last comment of yours which I’d like to reply to is how you said that I should “keep that shit to myself.” I’m sorry, but I couldn’t do that even if I tried. It’s part of who I am.