Life in the Fast Lane (sort of). 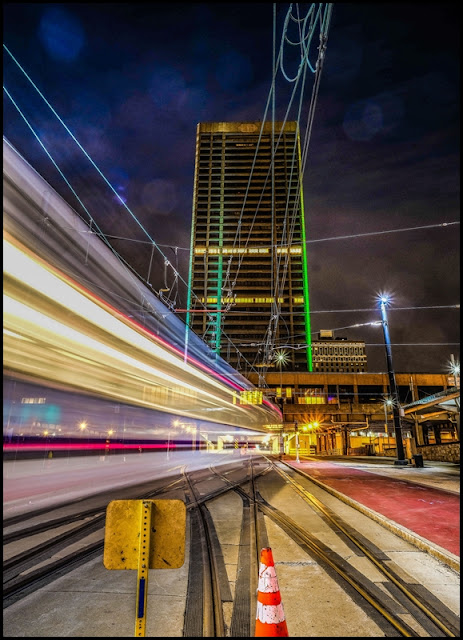 Here’s the backstory on this photo. I was out last evening roaming the city and taking photos when this scene appeared in front of me (but without the moving train in it). For those not from the area, this is quite literally the end of the line; the last subway stop. It’s difficult to tell from this photo but the street and train both travel directly under the building in the image; the building was built over the street. When I saw this last night I liked how the crisscrossing of the train tracks on the ground and wires above sort of mirrored one another, and the illuminated building made a nice backdrop. I was aware that there was a train sitting idle behind me, and even made eye contact with the operator as I parked my bike on the sidewalk and crossed the track to set up the tripod, choosing to stand behind a pylon and caution sign knowing a train would not travel there. As soon as I pressed the shutter the train began to move. I had not planned on a train in this photo but this is what happened. There are a few things interesting about this. Firstly, the train not only moved through the photo but also crossed to a new track which placed it in the center, making it an unexpected focal point. Also, it would appear that the train was moving at a high rate of speed. It wasn’t; it was just pulling away and maybe going a couple miles/kilometers an hour. This was a 30 second exposure so as the train slowly crawled through the frame it appears to be speeding. And lastly, what’s up with all the orbs in the sky portion of this image? It’s not the lens as it is clean. Maybe as the train passed it created dust in the air that the long exposure picked up? Or maybe they are spirit orbs which were surrounding me. You choose. I like to think the latter.
Email Post