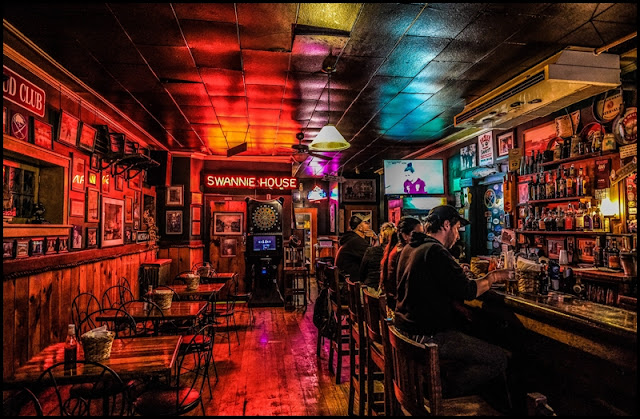 This is the Swannie House, Buffalo’s second oldest tavern which first opened its doors in 1886. Earlier exterior photos show the block it is on (at the corner of Ohio and Michigan Streets) as being lined with buildings. Today it stands alone like a living monument to our city’s past. Looking out the front door, the tavern is across the street from the historic Michigan Street lift bridge and in the shadow of grain elevators and mills. Once a rough-and-tumble working-person’s neighborhood it has now become trendy. This said, I had stopped there last evening for a couple beers and was surprised to see it nearly empty on a Friday night; “It’ll get busy real soon,” the bartender commented to me. The place smelled of beer and chicken wings and the first guy on the right is hunched over a plate of steaming morsels. When I asked the bartender if I could take a photo, as he scurried around readying the bar for the Friday night crush of customers, he looked up and replied, “What!” His reply carried an exclamation point rather than question mark, hence the way it is worded. Not sure he heard me I asked him again and without looking up simply replied, “Yea, sure, whatever.” Classic Buffalo, I thought to myself. Straight forward with no illusions. When I left and before unlocking my bike I stood for a minute and took in the scene before me and thought for a minute all the generations that have walked through the same door which I just did. Then I breathed deep and it smelled good; the city smelled like Cheerios from the General Mills plant just across the river.