The Dog in Sunglasses Who Needed Beer Money 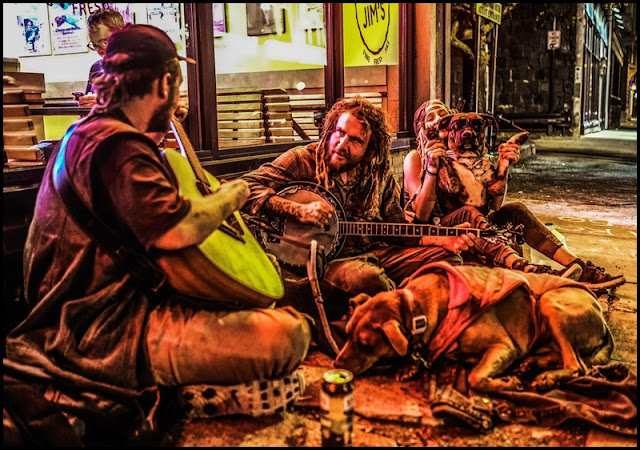 This evening while walking home I saw this group of people on the sidewalk (pavements to my friends across the pond) who were bathed in neon and minding their own business. They had written in chalk in front of them that they were in need of money for beer. I had actually seen them earlier on my way out for the evening and as I walked home they were still there. Say what you will but at least they were being honest regarding their request. I actually admire--and am a bit jealous--of their free spirit. I asked them where they were from and they told me but I don't think they were being truthful. This is fine, if someone on the street asked me where I was from I would likely change my story as well. Anyhow, as I passed them I stopped and told them I would give them a few dollars if I could take their photo. "Yes, please!" said the woman on the right with the dog in sunglasses. I actually took three shots of them (this is my favorite because of the lighting) and in the first she has her middle finger raised at the camera (possibly at me). Anyhow, after I gave the guy on the left a few dollars they picked up their instruments--as if on cue--and began to play some sort of skiffle. And this is why I love living in the city. There are so many different people to meet and their story is as different as yours and mine. Each of us has a story to tell whether it is true or not.
Email Post