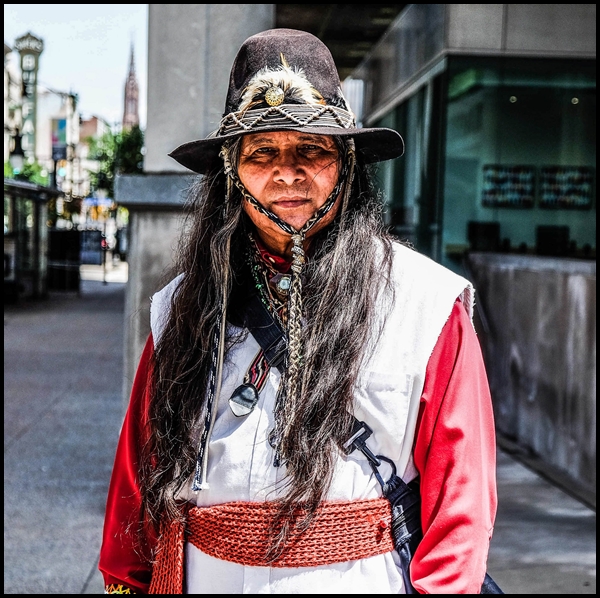 This is Bowandarrow. We met this afternoon while I was riding to a coffee shop on lunch break. I saw him as I passed Fountain Plaza and he was just standing there in his indigenous attire. After stopping I introduced myself and told him--while showing the camera--that I enjoy taking pictures of people and asked if I could take his. "Please," was a all he said while smiling. Afterwards I asked where he was from he told me "from the mountains" and something else in such heavily accented English I couldn't make it out. Thinking he was Native American I asked him, he then told me he was but he was from the mountains in Mexico. Being the arrogant American I just assume Native American means from the USA; he replied that he was Native [Mexican] American (as Mexico is part of America just not the US). Anyhow, after some more small talk I told him my name, gave him a card, and asked him his. He told me his name was Bowandarrow, not understanding I asked him to repeat it which he did. Still not getting it I asked if he could spell it so I could include it with his photo. Instead he mimed a person using a Bow-and-Arrow. Duh! I thought to myself as an imaginary anvil fell on my head like in roadrunner a cartoon. Asking him why he was here he simply replied, "I like the adventure."