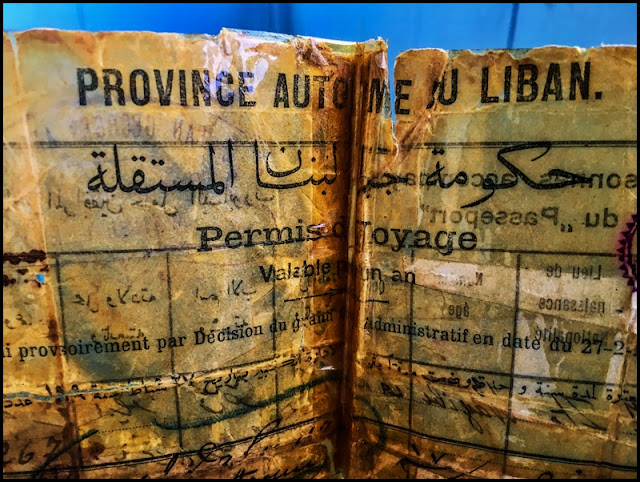 I was fortunate enough to recently inherit my grandfather’s “permission to voyage” papers when he left his homeland of Lebanon. They are written in French and Arabic and meticulously preserved by being covered in wide plastic tape by my sitto (grandmother). I know enough French to figure out what they say. The papers are dated almost to the day of 99 years ago of when I received them, June 1920. This would have been only a year or two after the Great Lebanese Famine that ravaged the tiny country—depending on which sources you read, killing as many as half a million people—and also just a few years after the borders were finally opened after WWI when the Ottoman Turks occupied the country and did terrible things. I never met my grandfather, who is my namesake, but can only imagine the atrocities he likely witnessed and contributed to his desire to come to America (the descriptions of the famine are incredibly horrible, google it if you are interested). It’s a weird feeling holding the papers knowing they were likely held in my grandfather’s breast pocket on the long voyage. I can only wonder what he would think of his grandchildren, and me—the son of his eldest son. We are likely the reason he came here—so his next generations would have a better life. This is what I think when I see immigrants today risking their lives so their children can have better opportunity and not grow up in the terrible conditions they are fleeing. And I was thinking this today while at work and the TV was on in the next room with near constant coverage of our President’s most recent divisive language. It’s interesting that the more he tries to divide the more I feel connected to my fellow Americans, including future ones. The more he tries to divide the more he has forced me to look for the compassion that i know is there; forces me to tap into that compassion because that is what I choose, rather than hate or fear. Light always overcomes darkness. It’s a simple fact the light can be brought into a darkened room and light the room. Right now our country is going through a dark period and we need to fill it with light. And this is what I was thinking while walking home on a beautiful summer evening.
Email Post