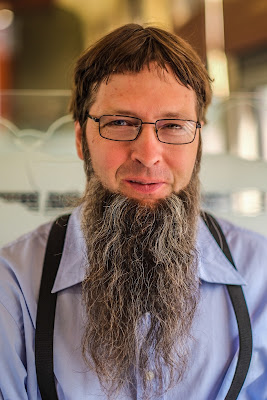 This is John, we met this morning while having breakfast on the Lakeshore Limited Amtrak train  while barreling through Indiana. His wife was there too but at the time of this photo, which was about an hour later, it was just us two in an empty dining car drinking coffee and talking.

John and his wife are Amish and trace their American ancestors back to the early 1800s; that’s when they arrived in this country and began farming the land. John is still a farmer and has an organic dairy farm in southern New York State. He and his wife got on the train in Syracuse. Besides the farm they also operate an organic bakery which she manages. They bake more than 400 dozen cookies a week, she told me. John and his wife are on their way to San Diego.

When I asked John how they managed to get time off the farm and bakery for this trip John smiled and said they have plenty of help, then told me they have 7 children; 5 boys and 2 girls. When they spoke to me they spoke perfect English but when speaking to each other they spoke High German.

It was interesting speaking with John when we were alone in the dining car. Both of us from different cultures but just two guys talking. I asked him questions about farming and he asked me questions about what I did. At one point I could see him glancing at the small tattoos on my hand; he didn’t say anything but I wondered what he thought. While we talked he made comments about the scenery and farms as we passed that expressed his connection to the land, “Look, they had rain last night,” and “look there are more deer searching for food.”

I asked him if it was true that there are so many Amish on the train because the can’t take airplanes, he confirmed it and added that he has never flown. He wasn’t missing anything, I assured him, and that train travel is much more civilized. His main mode of transport is horse-and-buggy and that his eldest son just purchased a new colt. When I told him I haven’t owned a car in nearly ten years and get around mostly by bicycle he seemed both surprised and impressed.

At one point I put my cellphone on the table and he asked if he could make a call to his son to check on the colt. They can own phones with landlines, he told me, but not cell phones. I found it odd that he was able to use a cellphone but not own one, though I didn’t say anything. When he spoke to his son he spoke in High German peppered with English.

While the two of us spoke alone it was easily apparent that he truly loved his lifestyle; the simplicity of it and his connection to the earth and his family. I have to admit I was a bit envious. After a while we were approaching Chicago and we were getting ready to part when I asked if I could take his photo. He agreed even though he didn’t like to have his photo taken and didn’t want to look at it. I totally understood, I told him; this is why I like being the one holding the camera instead of being in front of the lens. He chuckled, we shook hands and bid each other safe travels. Just two guys talking and drinking coffee.
Email Post