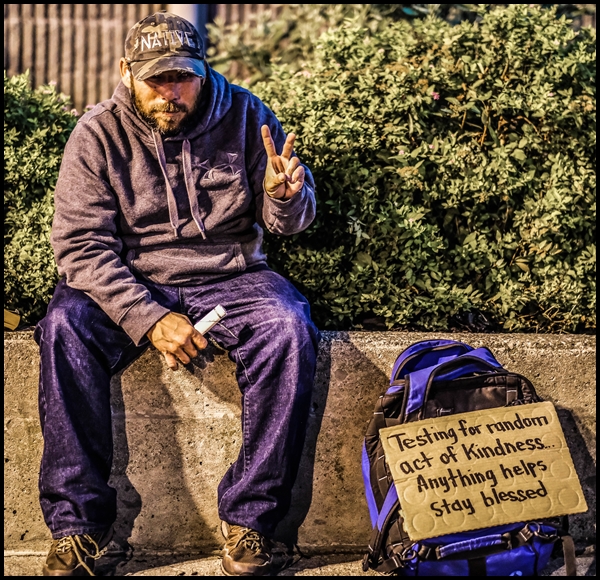 This is Ian. But before I tell his story, or what I know of it, I have to comment on how we met, which is sort of interesting.

I was out capturing some images while riding the bike this evening and consciously enjoying what is left of summer. On the way home I thought I’d stop at one of my favorite waterfront bar dives but it was packed so I pedaled on and stopped at another.

At this place the person tending bar seemed annoyed when I walked in and after waiting 5 minutes as they talked with another patron I raised my hand for service. I had a second beer and the service was a repeat of the first. I am not ranting here (as I’ve made a personal commitment not to post negativity on social media) but more so just commenting (and please bear with me because it results with meeting Ian).

There have probably been only 2 or 3 times in my life on this planet that I have not left a tip to a server or bartender and tonight was one of them. I don’t expect a pat on the back or a handshake when I walk in but I do expect to be acknowledged as a paying customer especially when the place is not busy. The bar and restaurant business is called the hospitality business for a reason. After decades in this industry I have learned a few things and one of them is that the customer does not care how your day is going, they simply want to be served. Before you ask I will not mention the place of which I am referring.

Anyhow, as I sat there sipping my beer I decided to take the money which I would have left as a tip and give it to the first street person I saw on the way home. I didn’t have to go far as I left the bar there was Ian sitting about 5 feet from my bike. He was reading a book and not panhandling but I saw his sign so offered him the money.

Ian is from Vancouver and rode a bike (a fixie no less) to Columbus, where the rear hub broke and he abandoned it. From there he hopped a freight train and got off in Buffalo. He’s on his way to NYC. He’s planning on getting a bike here in Buffalo to ride the rest of his way to NYC.

I didn’t ask why he is traveling from Vancouver to NYC but did ask how he lost his eye (up close one of his eyes is glazed over and visibly white), he lost it in a bar fight he told me. When I asked where he was sleeping he told me next to the Homeless Jesus statue downtown. He added that he has faith and that he felt protected by the “Big Guy” when he slept there.

We chatted a bit longer about bikes and traveling, and I told him a few places to get food and possible safe places to sleep, and then we shook hands and parted. There are all sorts of people in this world, and each of us need the same respect. Whether it is a bartender, a patron, or a person on the street, we are all humans traveling from one destination (birth) to the final destination (death, or transformation to another consciousness), and what we do in between is what matters. Tonight Ian and I chatted for about 20 minutes and my life is enriched because of him.