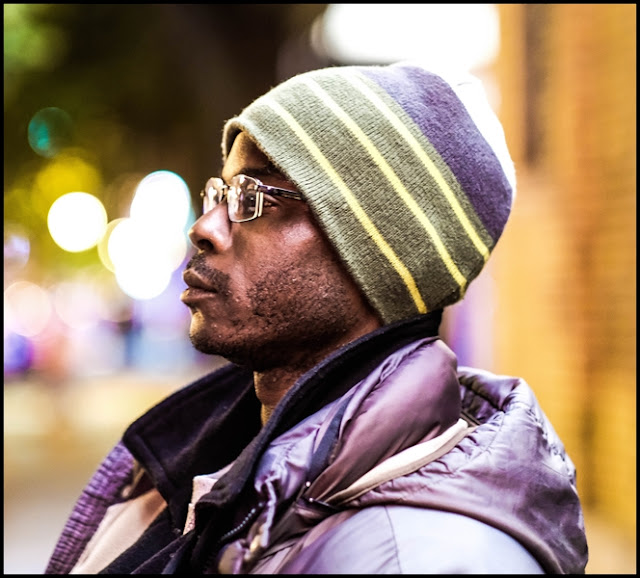 This is Cooley. I’m not sure if that is the correct spelling, but we met briefly this evening while I was walking home. I had seen him in the neighborhood before. He raps for people on the street for money and he’s good at it. As we passed each other this evening he stopped and asked, “Hey Mister, can I bust a rhyme for you?” Sorry, man, I replied, I don’t have a cent on me. I’ll take your picture though, I added, as I showed him the camera. Alright, he said, and without skipping a beat he struck a pose. People want to be seen. We were in a dark spot and needed some light, I told him. Where do you want me? Motioning to a lighter spot on the sidewalk he struck this stoic pose. I also captured another but like this one better. When I showed it to Cooley on the camera his reply was “Damn,” (pronounced, Dayyumm) “you made me look good.” I’ll try, I told him. We didn’t chat that long as I was cold; stupidly didn’t wear a heavy enough coat for mid-October. After a brief chat he told me he was on Facebook and I told him where I would post the photo; he said he would look for it later this evening. We parted and as I walked away I could hear him asking a young couple if he could bust a rhyme for them. Each one of us—no matter who you are—is trying to make it in this life, and this is how Cooley is doing it. Beautifying my neighborhood with song. Thanks Cooley, it was great to meet you this evening, I hope you are seeing this photo.
Email Post