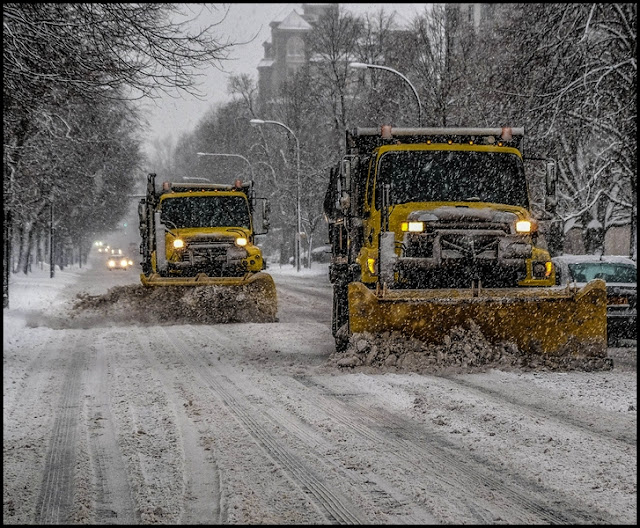 Okay so first this (to those who’s thumbs are poised at their phone’s tiny keypad and about to tell me to be careful), I am not nearly as close to these trucks as it may appear in this photo. And in regards to living without a car—and whose main mode of transport is a bicycle—I tell people that I am crazy but not stupid. If the weather gets too dicey I simply walk or take public transport. I rode this morning but this evening, as the weather progressively got worse, I walked to the JCC which is when this image was captured. As an aside, I have to mention this: someone recently asked me if I had a drivers license and asked it in such a way as to suggest that maybe it was revoked for some reason, thus the reason I do not own a car. FYI, I have a current, valid, and clean license which I use on occasion (mostly for work), but voluntarily choose not to own a car. It’s been nearly 10 years since I’ve owned one in fact. Relinquishing car ownership was one of my first conscious choices towards self-transformation (but that topic is for another much longer blog post). Anyhow, I am living proof that it is possible to live without a car, even in the northeast. Is it difficult? Sometimes, I’d be lying if I didn’t admit that. But the richness I receive in return from being on a bike or on my feet outweighs the negative by multitudes. I’m not suggesting you get rid of your car, as I am fully aware that it is not possible for most, but I am suggesting it can be used less. The next time, for example, you need to go to the store which is just a mile away—or even two—rather than reach for your car keys throw on a backpack and go for a walk. You’ll be amazed at all you’ll see. But now I’m beginning to ramble, I’ll get off my little soapbox.
Email Post