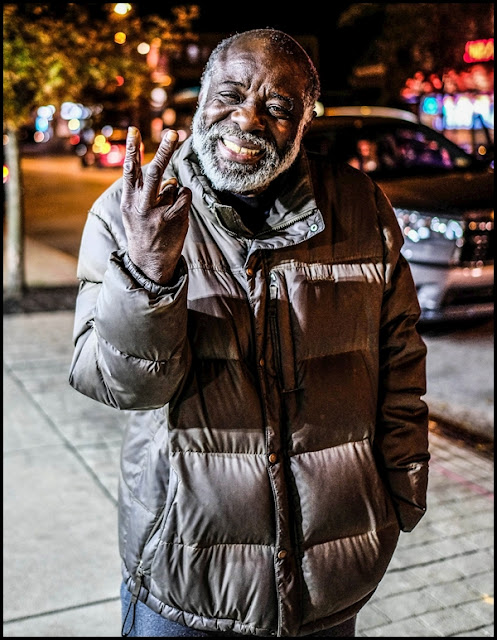 This is Sly (Sylester Bennet). If you are from Allentown, the Elmwood Village, or the West Side of Buffalo you know who he is. Today I learned the sad news of his passing. He was a good guy. “Hey Allentown,” he’d yell in his deep bellowing voice when he’d see me walking or riding a bike. He scared some people because of his gruff demeanor, but he was nothing to fear. It was always great to see him. There are many stories I’ve heard about him and don’t know which are true or partially true. Someone told me that he was a Vietnam vet. He also suffered from schizophrenia most of his adult life and that’s why he was on the street. He told me that himself. I’d see him outside in all weather, and when I’d ask where he’s been staying he’d offer his usual reply, “Oh you know you know.” He was always ready to have his image captured and then I’d show it to him on the camera. Once he didn’t like a photo so I deleted it and took another. This is the photo of him he liked. It’s from this past November, that’s the last time I saw him. I haven’t seen him at any of his usual locations as of late and have been asking around to no avail, and then today I heard the news. I will miss you on the street, Sly; your quick smile and your conversation. You were part of the fabric of what makes our city so great. Rest easy brother; I know you have finally found peace.