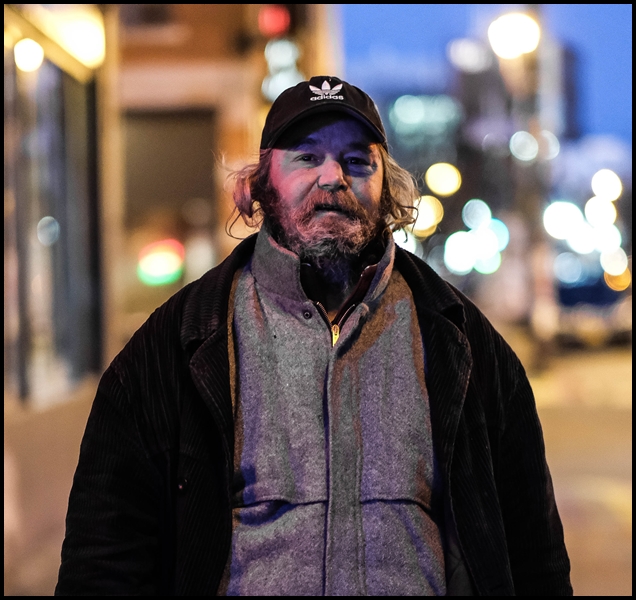 Other than going to work I hadn’t been out of the house in a week so this evening I went for a walk.  That’s how I met Dan. He has been on the street for about three years, he told me. The last place he was staying was burned to the ground while he was at a shelter. He was at a shelter because the house had no heat and he was cold, so when he says “staying” he was probably squatting. And when I note this please know that it is without judgment, but it is part of his story. This image is much closer than we were actually standing, we were easily ten feet apart. I noticed that Dan was keeping his distance and asked if he were concerned about the virus. He was, he told me, that’s why he hasn’t been staying in shelters even though the bunks were spread far apart. He also said the shelters were simply not safe. When asked where he was staying he wouldn’t tell me directly, which is understandable and not uncommon. We talked for about ten minutes. He was well spoken and not under the influence. He is 63 and from Northern NY State and has done all sorts of construction work but is now tired and his body hurts, he added. I have to comment that Dan never asked me for money. Someone recently gifted me a stack of cash cards for McDonald’s with the sole purpose that I give them to street people, so I offered him one and gave him a couple dollars as well. Still keeping our distance, I told Dan that I would set the money and the card on the ground for him to retrieve as I stepped away. We both laughed, but I really wished I could have shaken his hand. Some that are reading this are already drawing conclusions and opinions about Dan (and possibly me as well), and that’s okay. To that I’ll say that all of us have problems—every single one of us—and that no one aspires to live on the street, but some end up there. Each one of us has the same worth. If there’s anything this virus has taught us it should be that it is not selective. It strikes all equally. It doesn’t discriminate and neither should we. After parting I walked home through the quiet streets and could hear the sound of my own footsteps, and it occurred to me that tomorrow is Palm Sunday.
Email Post