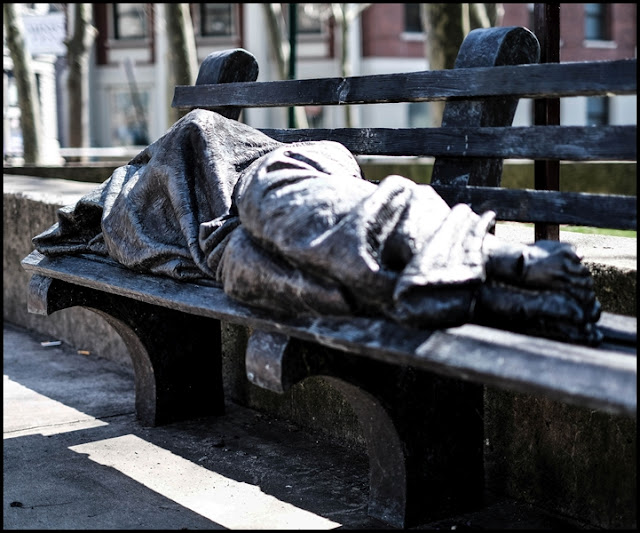 This is an image of the Homeless Jesus sculpture which is in the small Cathedral Park behind St Paul's Cathedral in downtown Buffalo. It’s a life sized sculpture of a person sleeping on a bench. At first glance one may think it is an actual person sleeping. The only indication that it may be Jesus is upon closer inspection one can see crucifixion wounds on his feet. It's an incredibly powerful image, especially that it is in an area of the city where it is not uncommon to see homeless sleeping on benches and elsewhere.

The sculpture is by the Toronto artist, Timothy Schmalz, and it has an interesting history of how it ended up in Buffalo (Google homeless Jesus sculpture). There are a few of them around the globe and I am glad one resides in my home city. It really is a powerful statement. There's another in NYC outside St Francis of Assisi Church in Midtown which is equally powerful. That particular sculpture has Jesus seated with his hand outstretched, begging. I encourage everyone to visit at some point, but that's not really the purpose of this post. Well, not entirely. But I digress, I'll start over.

I was taking this photo a few days ago and thinking how empty downtown was but at the same time had just come from the outer harbor which was teeming with people. Being in nearly desolate downtown felt good. And as I crouched and sort of knelt to capture the image a guy across the street was rummaging through a city trash can.

Here I was literally kneeling at the feet of a homeless Jesus statue which has the words of the Apostle Matthew written above it (also at the end of this post), and I had a pocket full of gift cards which people had recently given me (from as far away as Georgia) for the sole purpose to give away. How could I not offer this guy gift cards for food?

The reason for these posts is to bring an awareness of people living in the fringes of society. To give them the same humanity as you and I. To give them dignity. And it often makes me look at myself. But with this said, I don't always post photos of people or their stories whom I meet on the street. More often not, actually. Sometimes they ask me not to and sometimes it is simply too personal. Too painful. For the one telling and also the one listening. This was the case today. So while I will not post his photo or story I will tell you of the experience. It needs to be said.

After a few minutes of capturing images I packed up my camera bag on the bike but still had a camera tethered to my wrist and as I rode past him stopped and introduced myself and asked if he'd like a couple gift cards to local restaurants. He looked a bit dubious but accepted them (wouldn't you question my intentions?). He was wearing a face mask and blue nitrile gloves—the same that I wear at work all day—and looked to be about my age. We were just two guys on the street talking.

After chatting for a few minutes about where restaurant locations were I asked him a few questions, to which he responded. A bit guarded, he told me how long he’s been on the street and also the perfect storm of circumstances which led him there. At this point I asked if I could photograph him and he said no and started to walk away. But then he turned back to me. He was looking straight at me but I found it difficult to return his gaze as he responded. Instead, I looked away nervously.

“Do you know why I don't want my picture taken? Because I'm embarrassed. I'm embarrassed that I'm picking through garbage cans and don't want anyone to see me.” He turned and walked away again, but then turned back towards me and asked why I wanted the photo and where it would be. I told him and he said he would allow me to capture his image—that he would actually like it, and thanked me for talking to him—but not to post it anywhere. To which I agreed.

As we stood speaking I couldn't help but notice how similar we looked and though our lives were much different something led to this very point of us standing there speaking with each other. Two humans on planet earth.

I’ve said this before but it needs to be said again...no one aspires to a life on the street, but some end up there. And then there is a spiral of swirling difficulties which often keeps a person there. But each one of us—each and every one of us—has the same spark of the divine within us. I am convinced of this. Sometimes it is shrouded by circumstances or ego but it is still there. No one is better than another, even with different or so called “better” social or economic status (which means absolutely nothing, imho). This person allowed me to capture his image but didn’t want it to be published anywhere (which is understandable and also a reasonable request). But the thing he did want was to be seen, and a few days ago I saw him. As I pedaled home on that day I fought back tears and prayed. I prayed for this man, but also for all of us.

“For I was hungry and you gave me something to eat, I was thirsty and you gave me something to drink, I was a stranger and you invited me in, I needed clothes and you clothed me, I was sick and you looked after me, I was in prison and you came to visit me. Truly I tell you, whatever you did for one of the least of these brothers and sisters of mine, you did for me.” -- Matthew 25:35-36, 40