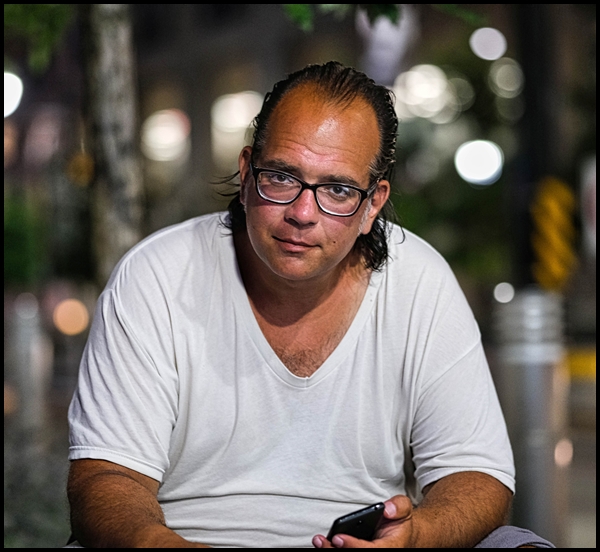 This is Brian. We met while I was capturing images of downtown this evening. I had the camera set on a small tripod just a foot off the ground, I was sitting on the ground, when he walked by with all his belongings in tow. I’ve seen Brian many times prior but had never spoken to him. What made me notice him is one of his legs. He wears shorts and it is swollen to the point that it is the same thickness from ankle to thigh. Tonight when I saw him it was freshly bandaged. Anyhow, after I captured a few images of the city-scape I walked the bike past where he was sitting and charging his phone (I’m not sure if this is unofficial from the city, but there are outlets throughout downtown where I see people charging phones). After saying hello I asked if he’d like a gift card to get something to eat. He initially said no (and can you blame him?) but after telling him that people have given them for me to give away he said sure and was very thankful. So here’s the thing. This is an example of how people cannot be stereotyped. Brian is well-spoken and we had a great conversation. He is originally from one of Buffalo’s wealthiest suburbs—one with gated communities—but he literally sleeps on the street. Like most on the street I’ve spoken with, a shelter is a last resort because they are so unsafe. Instead he sleeps sitting up against a building. After a few minutes of chatting Brian was less guarded and I less nervous; just two guys talking. But now I am home typing these words and he is likely sitting leaning against a building trying to sleep with everything he owns beside him. I won’t tell Brian’s complete story but will say that all of us are in this together. Brian is on the street and I am typing this in my living room with two pugs next to me and you are likely reading this in the comfort of your own home on your computer or tablet or phone, and maybe even snuggled under covers in your air conditioned bedroom. But in many regards we are not that different. All of us are doing what we need to in order to make it in this life. People on the street are there for so many reasons, and we shouldn’t judge. Tonight I heard Brian's story and my life is better because of him.
Email Post