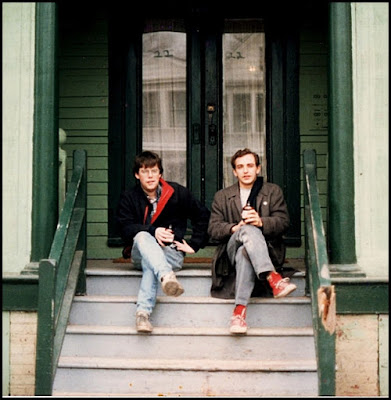 This is not my first selfie but it is the first that I remember. That’s me on the right and roommate Paul on the left. We are sitting on the front steps of the roach infested tenement which we shared (along with the late Gerry Brien III) in Poughkeepsie, NY 1986. I remember this day well though it was 34 years ago.

I set the camera on a tripod—a trusty Canon AE1 which sits on the shelf beside me now—and set the timer for 10 seconds then dashed back to the steps to look natural. Thus the reason my scarf is askew. This is a scanned image of the original photo and the original is on my desk as I type these words. But I digress as I often do. Let me begin again.

This evening after a meeting at church I had stopped out for a beer and a bite to eat and ran into someone who addressed me as Chef George. He’s a successful business owner now but 20 years ago was a student of mine. He had many kudos, which is something I don’t handle well. I kept diverting the topic.

The reason this is pertinent is that so many years ago this month is when I graduated from culinary school. I think of it each year. At the time I never in a million years thought I would be a chef. Didn’t think I had it in me. But I was for decades. When this photo was captured I was older than my years; 24 going on 44… “I was so much older then, I’m younger than that now.” - Bob Dylan

My point is this. Life is a journey. It’s not about the destination. While there is so much behind me (more behind than ahead) there is also so much ahead to look forward to. It’s not about how much you own or have; It’s about being alive. It’s about what we do with the incredibly short time we have in this particular incarnation. To quote the author, theologian, and civil rights leader Howard Thurman, “Don’t ask what the world needs. Ask what makes you come alive and go do it. Because what the world needs is people who have come alive.”