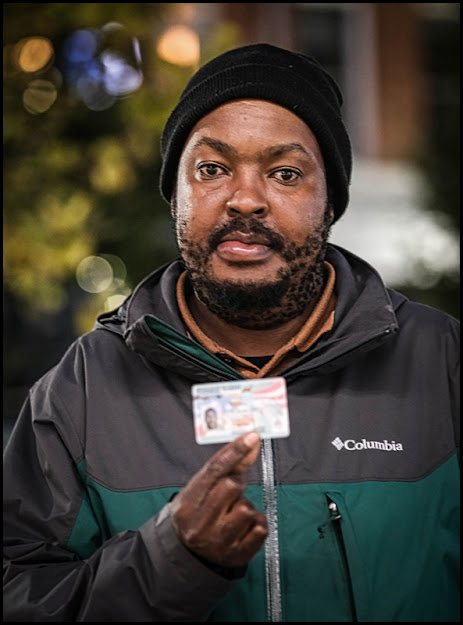 This is Boniface, we met this evening while I was downtown capturing images and he asked if I was “taking photos for my postcards.” That made me smile. Detecting an accent, I asked where he was from and that’s when I learned his story. He is from Nairobi, he is his father’s eldest son and came here two years ago with him with hopes to bring his remaining family once established; they are currently in Kenya. His father became ill last year and died; he’s been on the street until recently. His heart is both bursting with joy and also heartbroken, he told me. Just today, through a local agency, he was able to get an apartment, and also last week he was awarded permanent resident status in the US, that’s the card he’s holding. He also proudly showed me the small American flag which is in his wallet that the government gave him with the card. The reason his heart is broken is that earlier in the day he saw a woman walking downtown and her high-heel got caught in the pavement and she fell. He instinctively went to help her, and reaching down she looked at him and said, “I don’t need help from a n#####.” “She looked me right in the eyes when she said it,” he told me, “my heart was like an egg that was shattered.” I apologized to him for her and stated that not all Americans are like that and that racism has been brought to the surface with our current president. He knows that, he added, and that he is a Christian and has already forgiven the woman. Then said, “but with this card I can vote in this country, and I know who to vote for.” He also added that he is looking forward to the day when he can bring his family and they are all American citizens. “I have so much to offer this country. I work hard and I speak and write 5 languages.” We talked for quite a while before parting, and when I did Boniface thanked me for the conversation and also thanked God that we met this evening. We bid peace to each other and as I pedaled away could hear his soft voice calling to me to be safe while bicycling. There are nearly 8 billion people on planet earth and tonight I met Boniface and my life is enriched because of him. And like him, I thank our creator.