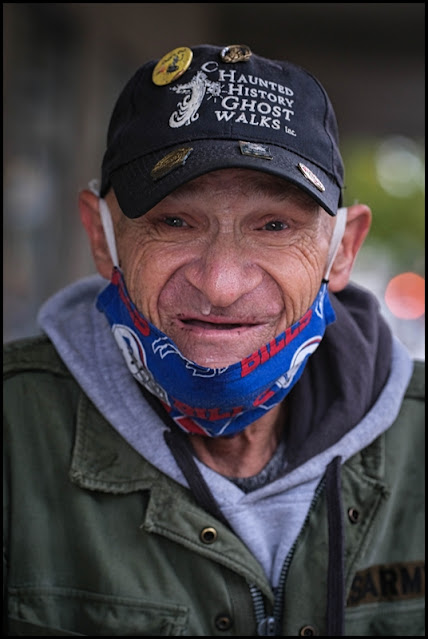 This is Rich. We met this morning as I walked to work in the rain. I heard him before seeing him. “Are you having a blessed day,” he called to me as I passed. He pronouncing blessed as two distinct syllables, “bless-ed.” Turning, I was surprised. He looked old enough to be my father, but he was out asking for change to get something to eat on a rainy Wednesday morning.

I had gift cards to two separate restaurants and asked which he preferred. His eyes lit up and asked, “Can I have both, I’ll use both if I can have them.” So I handed them over. He kept glancing at the camera that was tethered to one hand so I asked if I could capture his image. Before the words were out of my mouth he smiled and said yes.

He told me that he is an army war veteran and was discharged in 1980. I don’t know if this is true as I’ve learned that only a small amount of what people tell me on the street is actual. But nonetheless, here was this old man asking for change. I only had a minute to chat as I was on my way to work and running late, but as we parted he asked me again, “Are you having a blessed day?” I had never answered, so I told him that now I was. We both smiled and walked our separate ways.

It’s interesting in that I had started out having a crappy day. Didn’t sleep well last night, then rain today (which means walking and bus riding) and running late. In short my day did not feel particularly “bless-ed.” But after the brief encounter with Rich my mood had changed, and as I walked the remainder of the way to work in the rain I contemplated how much I had to be thankful for. I felt blessed, and Rich reminded me of this.