When did we see you hungry? 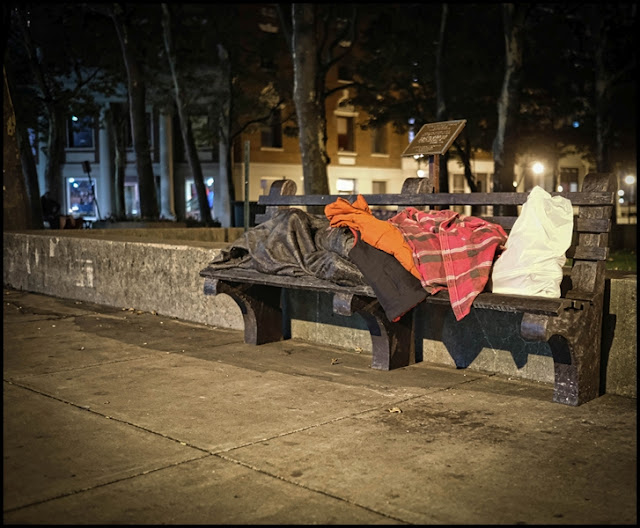 This is an image of the Homeless Jesus sculpture which is outside St Paul’s Episcopal Cathedral in downtown Buffalo and adjacent to one of my favorite micro-parks in the city, Cathedral Park. If you are not familiar with this statue, Google it. It has an interesting history and is quite moving. Anyhow, I was pedaling by and stopped to take a photo. People had left items on the statue for the homeless. Visible in the photo are a couple vests, a blanket, and a bag of sundries. When I see this it truly makes my heart swell. To paraphrase Anne Frank, “Despite everything people are still good.”  People want to help.

Anyhow, as I knelt to take the photo unbeknownst to me there was a guy lying on a bench in the distance watching me. When I looked up and saw his eyes staring at me from under the blankets it at first startled me, but I also couldn’t help notice how similar he looked to the Homeless Jesus statue lying on a bench in front of me. Also, what I didn’t know until arriving home and uploading the photo is he is in it. If you look in the distance to the far left and in the shadows he is sitting up watching me.

After packing my camera on the bike I coasted past him and stopped. Hearing me approach he pulled the blanket over his head. I called to him and he looked up and said, “What? Do you want to talk to me about God? I already know about God, that’s why I’m fine.” After offering him a card to a restaurant—which is not open at this time of night—he asked for money to get something to eat. He seemed neither high nor drunk so I gave him a few dollars, which is something I normally no longer do. I chatted with him for a couple minutes before parting. He did not want his photo taken, which is understandable. He then snuggled back under the blankets. As I pedaled away I glanced at him and then at the statue and again the similarity was striking.

So here’s the thing, and this is when I get a bit “holy roller” on you (I haven’t quoted much scripture lately as it seems to turn some people off). And I am in no way attempting to glorify myself by this story; yes I did give him a couple dollars but this is the first in a very long time. For the past months or even year I have been giving away gift cards that others have given me. But as is often the case, I digress.

We all get stuck in our little cocoons and forget that there are others in different circumstances. We get caught up in our daily lives, we scroll social media and sometimes argue with others we had never met. But it’s what is inside that counts. It’s how we treat others but also ourselves. The world right now—and especially our country, the Divided States of America—are incredibly precarious. What matters is what is in our hearts and how we treat one another. As I type these words I sit in my living room with a glass of wine and two old pugs at my feet, but this guy is lying on a park bench. Sure I gave him a couple dollars and a gift card, but it is not enough.

Now I’m going off on a tangent so I’ll step off my little soapbox and finish with the bit of scripture which I threatened you with earlier. This came to mind as I pedaled home. It is a portion of one of the parables that the Christ (which of course is a title and not his last name) was teaching his disciples. Whatever your views this is something to ponder.

“For I was hungry and you gave me something to eat, I was thirsty and you gave me something to drink, I was a stranger and you invited me in, I needed clothes and you clothed me, I was sick and you looked after me, I was in prison and you came to visit me. Lord, when did we see you hungry and feed you, or thirsty and give you something to drink? When did we see you a stranger and invite you in, or needing clothes and clothe you? When did we see you sick or in prison and go to visit you?’ Truly I tell you, whatever you did for one of the least of these brothers and sisters of mine, you did for me”—Matthew 25:35-40