Why I Don’t Scream (in the kitchen) 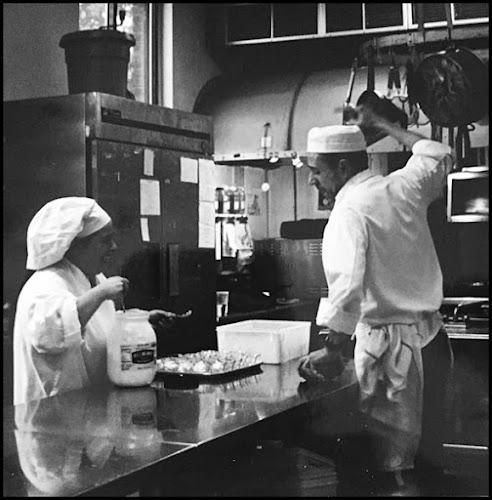 So a couple things. This is a photo of me pretending to scream at at friend and coworker, the late Kara Evancho, more than a dozen years ago. You can see it was a joke because she’s laughing hysterically. I can’t remember who captured this photo but I love it. Anyhow, I’m posting this because someone who is close to me has recently been the target of the aggressive behavior of a chef. I cannot believe this still happens in 2020. One does not learn from a screaming chef, they only know not to piss them off. A screaming chef shows not only their own insecurities but also their own self-loathing. And I am fully aware that someone now has their fingers poised at their keyboard to counter this. One of my favorites was where one of my pieces was published in a national magazine—titled, An Open Letter to Gordon Ramsey, which is still floating around the internet—where I spoke of the disservice he was doing to the entire industry by screaming at his cooks. There were many comments but my favorite is where someone called me a donkey. Anyhow, these words below explain why, in more than 30 years as head chef, I never screamed at a cook, dishwasher, or wait person. I am without doubt not saying that I was always a joy to work with—surely was not—but I never screamed.

Why I Don’t Scream (in the kitchen)

Before holding a chef’s position in a restaurant I had worked for more than a decade as a cook, and in that time I, like many, worked for people who could be known as “screamers.” To be more specific: chefs that have temper tantrums in the kitchen and basically act like grown babies. I was also in culinary school in the mid-1980s; this was before someone deemed this type of behavior unacceptable for instructors. Back then you could pay your high tuition and get screamed at, too.

During this time I had seen many tantrums; everything from the basic everyday screaming, to a more involved jumping up and down with hands flailing like a toddler who wants his mommy, and more scarier and aggressive scenes such as a chef throwing a student’s knife in the garbage because he thought it was dull, or having my table full of food prep “wiped clean” (onto the floor for me to clean up), and even a few pots and pans thrown across the room. Many chefs at the time thought that the best way to teach was through intimidation; some still think this way. But I’m convinced that no one learns when he or she is scared. The only thing they learn is not to make the chef mad.

But the incident that stands out, and the one that made up my mind never to scream in the kitchen, were directed straight at me. It was a simple case of being screamed at unnecessarily; a chef having a tantrum. It was the type of incident where you can feel a light bulb light up above your head, and when the light bulb lit above mine that day, as I was being screamed at in a kitchen full of co-workers, I still didn’t know if I were cut out to be a chef, meaning in charge of a kitchen, but one thing I did know was that I didn’t want to be like this chef, no matter how good he could cook.

It was 1987 and I was out of culinary school less than two years. I was on an extended working/drinking vacation in New Orleans, and working at a French restaurant in the Garden District. I was full of ambition, angst, and naivety; not a good combination. The chef, who was from France, seemed nice enough, even though the only time I remember him speaking directly to me was when he asked why the wings I made for staff lunch were so damn spicy. His sous chef (second in charge) was another story. He was a Cajun who spoke a sort of French patois that the chef could understand, but by the look on his face it also seemed to annoy him. But to the rest of the staff the sous chef was a tyrant.

I had just finished cooking 20 pounds of noodles to be served with that evening’s ragout, and was draining them from the large floor-mounted steam kettle. After rinsing the noodles in cold water I poured a small amount of vegetable oil on them to keep them loose. It was shortly thereafter that I heard someone screaming in the background; it was a sort of white noise because in that kitchen I was used to hearing it but not accustomed to it being directed at me. It took me a minute or so, after I realized the cook next to me was silent and sort of looking at me uneasily. “What the f*** are you doing?,” came the voice. Turning, and a little horrified I could see he was looking straight at me. “I don’t want f***ing grease on my noodles; use huile d’olive.” What he meant was to use olive oil, specifically French olive oil. Instead of saying the customary “oui chef” and going about my business, albeit a little emotionally battered, I stupidly attempted to explain that the less expensive vegetable oil (what he called grease) would wash off when the noodles were refreshed in salted boiling water. Well…the guy blew a gasket. Who did I think I was questioning his judgment (add your own expletives)? It went on for a while; it seemed like an hour, but was probably only a couple of minutes. Eventually I washed the noodles off and re-coated them with the pricey olive oil.

A few days later I was sitting in a bar on Decateur Street and saw him walking with a female companion; they were having an argument and I felt sorry for him, that he was full of so much hostility. But he helped me, actually: it was because of him, his name that I cannot even recall, that I have never screamed in the kitchen. No one is perfect, I know I certainly am not, and I’m also not always a joy to work with (current and former co-workers will easily attest to this), but the one thing I am pretty certain of is that because of that day I have never screamed at anyone in the kitchen.