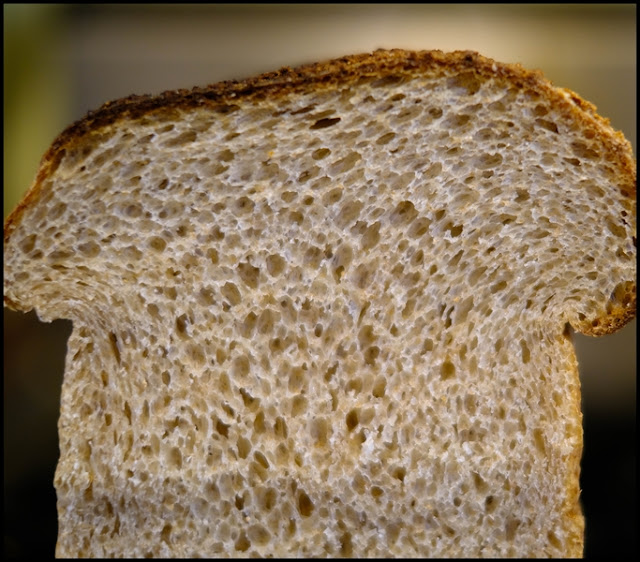 “Cast your bread upon the waters, for you will find it after many days.” ~Ecclesiastes 11:1

I’ve made my own bread at home for many years; decades, actually. Sometimes I’ll use commercial yeast and other times a natural leaven, or sourdough starter. The starter dates to July 1999; the summer my starter rose and my marriage fell. There was a point in my life where I baked exclusively with this starter, using no commercial or store-bought yeast. But there have been times where, not wanting to feed it daily, I’ve kept it dormant in the refrigerator. Sometimes for months; once, I think, even a year. And I like to joke that like a vampire a natural leaven gets more powerful with age.

This said, when the pandemic hit earlier this year and grocery items which we had previously taken for granted became scarce—such as flour and yeast—I concurrently ran out of yeast so I resurrected the starter which had been “asleep” in the refrigerator for a couple months. Because of the flour shortage I’ve also begun using my own blends, basically mixing together whatever whole wheat and also unbleached flours I could find (at the time), sometimes even using (egad!) flour from the dollar store if that’s all I could obtain. The reason I mention this is that to counter or elevate the low protein levels of some of these flours, particularly whole wheat, I add a tablespoon or two of vital wheat gluten to the dough.

I bake a pullman loaf about every 5-7 days; that’s how long it takes me to eat my way through it. This is a long sandwich loaf whose name is derived from its shape...like a pullman train car. While often light and airy (and I say often because each loaf is different), it does not have big airy holes that many free form European style loaves do. I have toast every morning and eat a lot of sandwiches, so this loaf suits me well. But because of the age of the starter and long fermentation of the dough, the tangy sour flavor is unparalleled, and the aroma as it bakes is intoxicating.

Here’s the thing, though. While baking with commercial yeast one can produce a rather insipid loaf from start to finish within an hour or two, but naturally leavened bread takes time. Depending on the season it can take more than a day. It is for this reason—if you are a home baker who bakes regularly—that the process must become part of the rhythm of your weekly or everyday life. The following is an example of how I bake during the fall and winter months. In the dog days of summer—during the humid Buffalo summers—this process can be shortened to 6-8 hours, but otherwise it takes about a day. In short, even during the chaotic lives we live the yeast which leavens the dough responds to the atmospheric conditions in which it lives. In many ways we do too—if we allow it—but we have to look away from our screens now and again to see it (says the person looking at a screen while he types away). But I digress.

When I arrived home from work a couple evenings ago I set two bowls on the counter. In one I added 3 cups of flour, a tablespoon of gluten, and about a cup of water, then mixed them with a large spoon to form a loose dough. In technical terms this is an autolyse, which is a simple procedure developed by the late French scientist and bread expert Raymond Calvel in 1974. In its simplest definition, when flour and water are mixed together—but not kneaded—then allowed to rest, gluten strands swell and begin to align and starch begins to form. In some ways this can be looked at as a form of pre-kneading; it’s as if the dough begins to be kneaded but was not kneaded. Anyhow, the outcome produces notable results in the form of lightness and character in the bread.

In the other bowl I poured about a cup of bubbling starter and ¾ of a cup of flour, then I mixed it together to form a loose, albeit smaller, dough. This is the pre-ferment, or basically a starter dough. These two “dough” were mixed in specific order—using the same spoon—so active yeast cultures were not added to the autolyse. After mixing these two dough I then fed the starter fresh water and flour so it will be ready when I need it again.

The process of making bread is nothing short of incredible if you think about it. I’ve often said—and I stand by this—that bread makes itself; we simply provide the right conditions. It’s a symbiotic relationship relationship between the ingredients. The naturally occurring yeast is a living organism. And when combined with water and flour it consumes the starch which is converted into sugar. And as the yeast eats it gives off gas, not unlike a human, I suppose. It eats and expels carbon dioxide, which also converts to a sort of alcohol. This is why naturally leavened bread smells so strong at times and has a sour flavor. As the gas is released it forms tiny bubbles in the dough. With more gas the bubbles grow, and as the bubbles grow it raises and lightens the bread. In the old days bakers would save a piece of the raw dough so they could add it to a new, or young dough, which in turn would be inoculated with the yeast from the previous dough and create a new loaf. The smallest portion of dough with live cultures can raise an endless amount of bread. It has been written about for millennia, sometimes as metaphor.

Interestingly, and as an aside, the word leaven comes from the Latin, levare, and then Old French, levain, which loosely translates as “to lift,” or “raise.” It is for this reason that the Eastern Mediterranean is still sometimes referred to as “The Levant;” so named because the sun rises in the east. Though it is said that the birthplace of bread is Egypt, which is technically not part of the Levant, bread has played such an important role in the cultures of the entire region that in some cultures bread is referred to as ayshe, or simply: life. But as usual, I’m off topic (again).

Before bed that same evening I combined the contents of both bowls into the bowl of an electric mixer which was fitted with a dough hook. I also added a couple tablespoons of olive oil and two teaspoons of kosher salt. After mixing it on low for a minute, I turned the mixer to medium and mixed the dough for another 10 minutes.

While the bread mixed I let my two old pugs out to do their business, brushed my teeth, and prepared coffee for the following morning. After the dough had mixed I turned it out onto a counter and kneaded, pushed, pulled, and stretched it for just a minute or so, and then shaped and rolled it to a log shape then placed it in its pan which had been previously oiled. The dough barely covered the bottom of the pan. After covering it with plastic I said goodnight to the dogs and went to bed.

In the morning the kitchen had a slight aroma of yeast and the dough had risen about halfway. While I poured myself a coffee the dogs danced around my feet for their food. This time of year the kitchen is cool so I knew that the bread would not be ready overnight. In summer months it would be ready to go in the oven, but on this day it was not. During winter months, when the kitchen is cold I sometimes set the loaf next to a burner on low to warm it a bit; today that was not necessary so I showered, dressed, and pedaled to work for the day. And while I worked the yeast continued to do its work as well...eating and expelling gasses which in turn formed tiny bubbles in the dough and expanded as it continued to work which in turn rose the dough.

After work I pedaled home and found the bread completely risen so I preheated the oven while I fed the dogs and let them outside. While the bread baked I poured myself a glass of wine and checked email and social media. When the loaf came out of the oven I marveled at its beauty; I never grow tired of this.

After allowing it to cool for a bit, I carefully sliced off the heel and tasted it. The bread was still warm and the sour-crunch was familiar...it was home. So I sliced two additional slices and layered them with cheese, avocado, raw onion, and some of the last tomato from the summer garden. After pouring a couple tablespoons of olive oil in a small cast iron skillet and watching it dance in the heat, I added the sandwich and pressed it with the back of a spatula while it sizzled and my dogs looked at me with anticipation.

Then, and after a full day had passed and I also spent a better portion of it cooking for others, I ate my sandwich for dinner, along with a crisp apple, then tossed a few pieces of crumbs of crust to the dogs. After finishing, I poured off about a half-cup of starter which was bubbling on the counter and discarded it (this is an unfortunate necessity unless you bake everyday or give it away) and fed it with fresh water and flour.

And so while the bread rose another day had passed. For this I am thankful, for one never knows what is next, what is in store for each of us. There are many things I’d like and many things I want to do, but on this day I am here typing about bread, and for now that is okay.

“You do not know what will happen tomorrow. What is your life? You are a mist that appears for a little while then vanishes.” --James 4:14

In one bowl begin an autolyse by combining 3 cups flour, 1 tablesppon wheat gluten, and a cup of water. Mix to form a loose dough, cover and set aside.

In another bowl begin a preferment by mixing together 1 cup starter with about ¾ cup flour. Mix, cover and set aside.

Turn the machine to medium and mix the dough for about 10 minutes. Then transfer the dough to a floured table and knead and stretch it for a minute, then shape it into a leaf and place in an oiled pan. Cover the down with plastic and allow it to rest until fully risen. Depending on the temperature and humidity of the room, and also the strength of the starter, this can take between 6 and 24 hours.

Bake the loaf in a preheated 400F for about 30 minutes, or until brown, crisp, and sound hollow when tapped on. 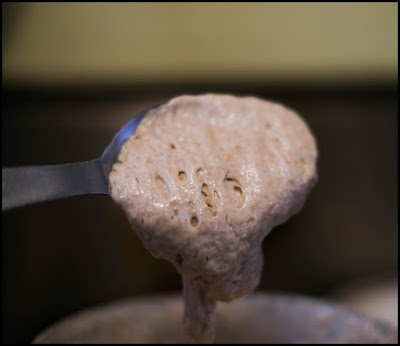 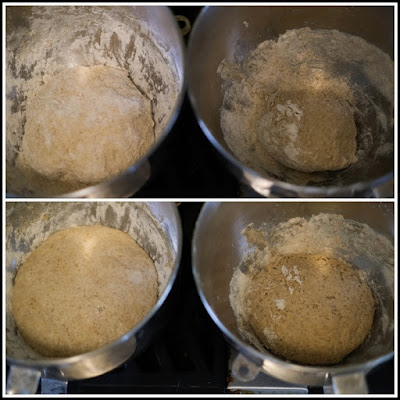 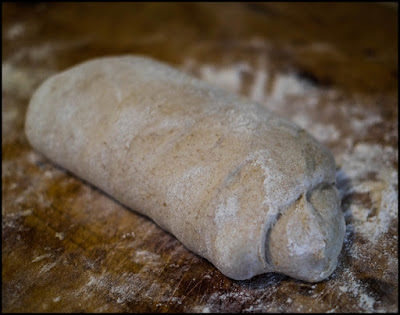 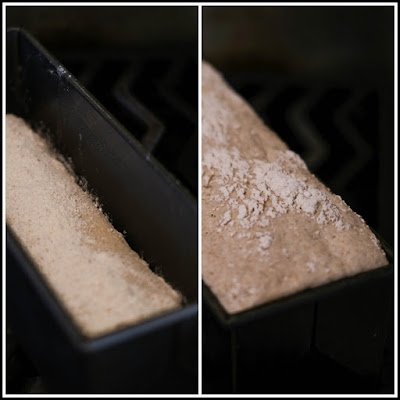 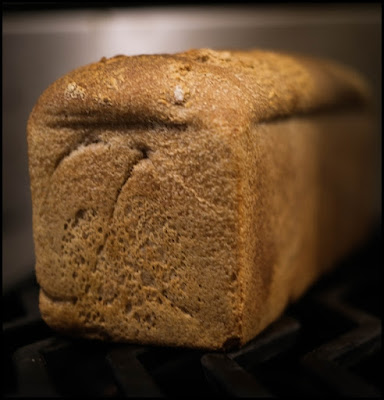