Come and Get it. 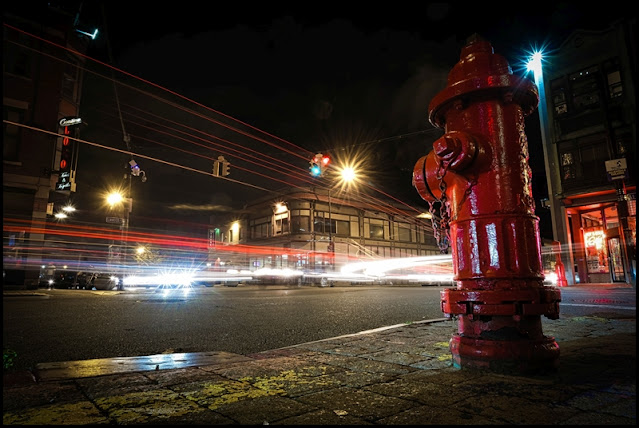 The great landscape photographer Ansel Adams said that “There are two people in every photograph: the photographer and the viewer.” I’d like to add that there are sometimes more than two people, there are also people viewing the photo as it was captured, and there are people that view the image after it was captured, such as you viewing this now. You in fact see what the photographer was seeing when they captured the image. But you don’t always experience it fully so I’ll tell you what I experienced while capturing this image, and oddly it has to do with how one treats their fellow human.

I like this photo, don’t think it’s great, but do like it. It captures what I was hoping...a street scene on a busy and unusually warm Friday evening in October. I intentionally kept the fire hydrant in the frame for something stationary in the foreground as cars zipped by and people crossed the street. At the top left of the fire hydrant you can see a blur, that’s actually a person who stood still for a few seconds; this is what happens in long exposures. People become invisible and streets look empty.

I also have to add that this is only two city blocks from my home and I had on a pair of old jeans, Chuck Taylors, and a tattered jean jacket probably from the ‘70s. You’ll know why these details are relevant to the story soon enough.

After a long work week of rushing around a kitchen I was and am tired. For this image I had a small 6” tripod to get a “worm’s view” of the street. But to do this I had to be low to the ground to operate the camera, and the prospect of staying bent at the waist or squatting for a length of time was not going to happen, so I knelt on the pavement. This is an important detail as well.

As I knelt making adjustments to the camera and capturing a few long exposure images I heard in the distance, “Here you go. Here, come and get it before the light changes.” There was a lot of activity so it was sort of like white noise in the back of my head and I ignored it. But then they said it again and I looked in the direction of the woman’s voice beckoning. To my surprise it was an SUV at the stop light (to the right of the photo and just out of frame) with windows rolled down, there were (I think) four people in the vehicle, and the driver held a single dollar bill out the window and said it again only with more force, “Come and get it before the light changes. I know you need it, don’t be shy.”

I stared at them to see who they were speaking to and they looked directly at me so I actually turned around to see if there was someone behind me—there wasn’t—so I looked back to their stares. Now she waved the dollar, “Come on, the light is going to change.” They thought I was homeless kneeling on the pavement and this was their condescending way of offering me something.

The light changed and they had to move as there were cars behind them, so the woman crumpled the single dollar, threw it in the street, and said, “You can pick it up after we leave.” As they rounded the corner I kept their stares in disbelief. One of the guys in the back leans out the window and yells, “F@#& you baldy.” I don’t take this as an insult as I am fully comfortable with male pattern baldness, and have in fact shaved my head for more than 20 years. The reason this is important is because I still couldn’t believe they were speaking to me even though the entire while our eyes were locked, but now I knew for sure. Throughout the exchange I had never said a word. The single crumpled dollar blew threw the intersection. I thought of retrieving it and giving it to one of my street friends but I didn’t even want to touch it.

So a couple things about this story. Firstly, yes this is true. Secondly, please do not respond with anything like, “Oh Joe, I am so sorry this happened to you.” Actually, please don’t respond with anything negative because nothing really “happened to me,” but also that I would rather be mistaken for being homeless than some other types of people (this is actually not the first time someone has thought I was homeless).

My point is this. If you are not sure how to interact with someone on the street then simply treat them as another fellow human. If you feel the urge to offer someone money don’t make them beg and crawl for it, but rather look them in the eye when you speak with them, converse with them, and hand it directly to them.

We are all humans and the same race (whether or not some care to admit this) and on an incredibly overcrowded and failing planet. Treat the next person as you yourself would like them to treat you. At present I am currently trying to rectify the mild contempt and judgment which I have in my heart towards those in the SUV.

So yes, though there are no people actually visible in this photo, there are many in it. Including myself, even though I was kneeling on the pavement behind the camera. I’ll get off my little soapbox now.