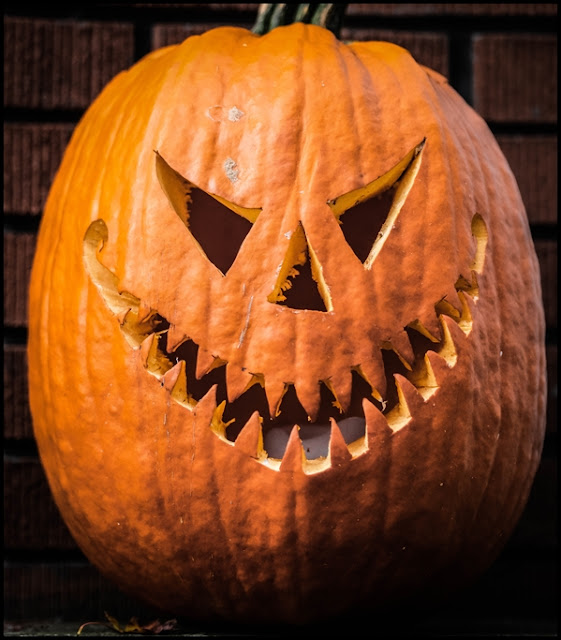 So this is interesting, and it’s also a little glimpse into my mind which I have difficulty shutting off at times. I captured this image while walking to a coffee shop this morning and it got me thinking. It’s interesting how Halloween is often portrayed with creepy imagery such as this or skeletons, but really it should be the opposite. If narrowed to a single statement, Halloween is about communing with those that came before us. Okay, that may be a little creepy, but it shouldn’t be, and as usual I digress.

The name of the holiday (or holy day), Halloween, is a Christianized version from its Pagan roots. Though likely used prior, the term Hallow-E'en, or Holy Eve (later, All Hollows Eve) was popularized in an 18th century poem (Harper, 2020). In Old, or obsolete English a hollow was a holy person, thus Hallows Eve was the evening prior to Hollows Day, or All Saints Day as we now know it, the day on which we are supposed to pray for the saints that came before us, and offer prayers for the general deceased population on All Souls Day, the following day. But this of course goes back further, before Christians adopted this date. It began with the Pagans.

The Celts are usually those associated with the origination of the holiday on this date referred to as Samhain, and it had practical purposes as well. They would have a celebration and feast on this date as days grew short and night longer with the darkness of winter at hand, which was also an opportunity to contemplate death—literally and figuratively—of those who came before them. To them, this time was also a “thin space,” or a time when the distinction between the living and dead was thin, the veil—in many respects—was lifted and spirits of the dead could walk the earth (Hansen, 2017). In Mexico and other Latin American countries this day is known as Día de Muertos, or Day of the dead, and is a day when friends and relatives spend the day at cemeteries communing with their deceased relatives and friends.

So how did Samhain become Halloween? Originally All Saints Day was celebrated on May 13th but in the eighth century Pope Gregory III moved it to November 1st (Hansen, 2017). This was done—it is easy to surmise—in order to align a Christian holiday with a Pagan one, thus making it easier to draw more Pagans into the Christian faith (if you find this interesting, do a little research on the original dates of Christmas and Easter).

Okay, so I wasn’t thinking all of this as I walked to the coffee shop, but I was thinking two things. One was that this shouldn’t be thought of as a scary holiday so much as a sacred one. And also that it should be the saints who are praying for us, not the other way around. While I do believe there is something after this physical plane—but don’t know what—I also don't believe in the existence of hell but do believe that it was created by the church as a form of control. Hell is the reason we are supposed to pray for the saints. The retired Episcopalian Bishop, John Shelby Spong, says this better than I, “If you have heaven as a place where you’re rewarded for your goodness and hell is a place where you’re punished for your evil then you have control of the population” (Brown, 2018). Some claim that first notions of hell were written or invented by Dante or even Augustine, “Augustine insisted that hell is a literal lake of fire in which the damned will experience the horror of everlasting torment; they will experience, that is, the unbearable physical pain of literally being burned forever” (Zalta, 2017).

Okay, so now I’m getting a bit long winded and off track again so I’ll halt here. Happy Hollows Eve and Hollows Day, don’t forget to commune with those that came before us.

Hansen, R. (2017). Tricking and treating has a history. The Conversation. https://theconversation.com/tricking-and-treating-has-a-history-85720.