October 1982 (notes from my younger self) 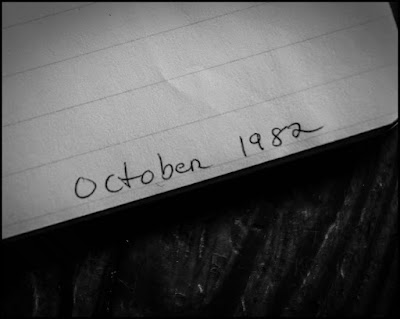 Recently while going through some old journals I came across a weathered composition notebook, one of those notebooks with marbled covers and wide lines we used to have in grade school. In it are some of the first words I wrote as art, opposed to school work and the like. It’s not really a journal so much as a small collection of poems and lyrics. At the time I was 20 years old and still living in a windowless basement bedroom of my parent’s house even though they had made their transitions years earlier. I wasn’t sure whether I was going to pursue becoming musician or attend art school for photography. Though I was already working full time as cook in a Greek diner, pursuing cooking as a career, let alone going to school for it, had not yet entered my thought process.

Already taking photos and an aspiring bass player—still own the bass but barely play it these days—I affixed a white cross to the front of the bass as it was not I who was playing but the Spirit playing through me. So I thought. In retrospect I can now see that Spirit was a poor musician.

Anyhow, as I flipped through the notebook yesterday these words stood out; it’s simply titled, “October 1982.” While I do remember writing in that notebook sitting at a table in the basement bedroom I don’t remember writing these specific words.

You may not believe in
organized religion
but the word of God is true.

Everybody is
created equal
no matter what their race or creed.

We are all the same.

While I was raised in the church, and in fact am again a member of the same liberal denomination as my youth, at the time I did not attend services. I stopped going after my dad had passed and my mom became terminally ill, and then also passed. My mom was the one who took us to church each Sunday, and since a young man I sometimes feel her presence who I’m convinced is one of my guardian angels. She’s with me now as I type these words.

It’s interesting because at the time of writing those words I had barely any life experience—had never been anywhere or experienced much, was so young—but still in those words spoke with authority. The audacity of it surprises me.

There was a bible which I kept on the table next to my bed like a good luck charm and rarely read but would flip through it on occasion. Awaking one morning and groggy from the night before (the drinking age at the time was 18 or 19) the bible was open. I don’t remember opening it but probably did. It was open to the first page of the Gospel of John, I’m thinking now this was the inspiration for those words, “In the beginning was the Word, and the Word was with God, and the Word was God.” (John 1:1).

To me, Word could easily be replaced with Truth... the Truth was with God, and the Truth was God. The Word is the original Truth which is planted in each of our hearts “no matter our race or creed.” I am convinced of this. We all know this, but for some, I also believe, it has been shrouded or buried.

In the Hindu tradition the Word is the original Om, or Holy Vibration from which all things are derived. In short, the very beginning of all that is. But I digress.

So where, I wonder today, did this authoritative voice in those words come from? In 1982 I was a young punk who’s main motivation was to meet girls (but was not very successful).  Today I am convinced it came from within. Something I channeled. The Spirit spoke through me in words (but not my bass guitar). These core beliefs were in me then just as they are now. But like so many of us I often need reminders to remember, to help them come out.

There’s a handwritten quote tacked to the front of my desk which has been there for years. It is by the late Trappist monk, mystic, writer, photographer, and human rights activist, Thomas Merton. It reads, “The person of faith who has never experienced doubt is not a person of faith.” Yesterday I was experiencing doubt and it scared me as it often does. Then I stumbled upon this notebook and my own words written so many years ago. Without knowing it I had written a note to my older self.

Like many things as a person ages, writing comes easier to me now than it did in my youth. Words flow easier, there are less misspellings, and a lot less commas. What came out of me then still does today, but maybe a bit more expounded through words, images, and actions.

The Word of God is Truth. The Truth of Spirit is Real. She created all of us the same (on the inside) and in His/Her own image. We are all beautiful. We are all gifted and have something to give. And we are all equal. No exceptions.

This, I suppose, is what I was attempting to say 38 years ago. To myself and others. 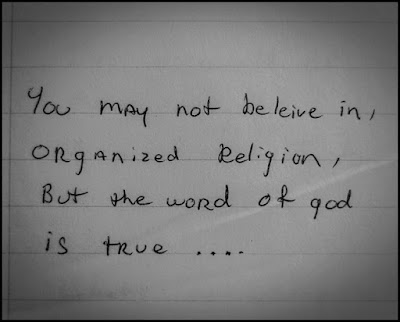