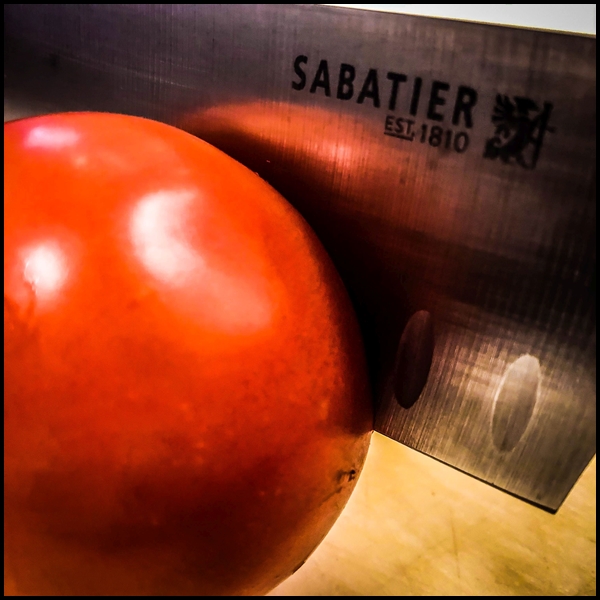 While at work today slicing tomatoes for lunch service and feeling a bit melancholic began thinking of all of the New Years Eves that I’ve worked. My situation is not uncommon, plenty of people work this day. But in the food service industry it is historically one of the busiest nights of the year and is not happening for most part. Far removed from it now, working as a chef on New Years was always exciting. It was like the grand finale after making it through December with the countless Christmas parties and caterings. New Years Eve in the kitchen has a different air. I’d be lying if I didn’t admit that I missed it a bit. Interestingly, while contemplating this today the New Years Eve that came back to me the strongest is one before I worked as a chef but was a cook (there is a difference) many years ago. I was one of 12 externs working at a large hotel in the south and worked New Years Eve in their fine dining restaurant. One of the cooks failed to show and out of desperation the sous chef put me in the saute station. It was the first time I had worked the station by myself and it was busy. The stove top was not open burners but a large cast iron flat top in the European fashion which allows for large amounts of pots and pans to be shifted about depending on what you were cooking. The center was the hottest and glowed red; sweat poured from every pore. Being New Years Eve it was exceptionally busy and at times there were probably more than a dozen orders being sauteed in separate skillets. The expediter (person who calls out orders and dictates the flow of the service) was French. Because of his accent and the commotion of the kitchen I sometimes could not hear or understand what he’d call to me. I’m convinced he accentuated his accent for that very reason. Though it was company policy to wear name tags he still acted like he didn’t know my name and instead called out, “Monsieur saute” (pronouncing it loudly missyure sowtayyy). I draw a blank with what was on the menu other than frog’s legs in garlic butter (who was eating all these frog’s legs, I remember thinking). Anyhow, I did well and later while we cleaned up the Austrian born Executive chef complimented me. But this isn’t what makes me remember this evening with fondness and why in a way it correlates to today; it was at the after party.

The party mostly gathered after midnight as we all had just gotten off work. I remember bringing a bottle of Paul Mason Chenin Blanc with a screw cap and drank it straight from the bottle (I was very sophisticated). What stands out the most in memory is something one of the young externs said; she posed this question to us, “What does everyone want from this coming year?” It was the last day of 1985 and we were all so young, but almost on cue we said in sync, “To graduate from the CIA (Culinary Institute of America).

The reason this came back to me and why I think it is pertinent to today (but has nothing to do with my history or cooking) is that at the time we were all on the cusp of something; the trajectory of our lives were about to change, hopefully for the better. And this is what I think of us collectively now, and when I say collectively I mean all of us, not just the good ol’ U.S. of A.

2020 sucked. Without doubt. But we as a species (humanity) are on the cusp of something. The trajectory of us isn’t about to change, it already has. The question is what we will do with this. How will we adapt. Things will never be the way they were or what we thought was “normal.” It will be different, it already is. But it can be good if we allow it. It will also take work if we want to survive (and by this I do not mean simply surviving the pandemic but this is part of it; there are plenty other ways we can wipe ourselves off the planet). And while this may sound bleak I don’t mean it to be because I do have hope for us, and I hope that you do to. We are survivors; it is a natural instinct. Tomorrow is a new day and a new year, but in many ways we are entering a new era. But we all must do our part...to start with, wear your mask ;)

And this is what I was thinking about while slicing tomatoes for lunch to serve to the formerly homeless and 35 years to the day after working a saute station by myself on a busy night in a large hotel for the very first time.

What do you want for this coming year?