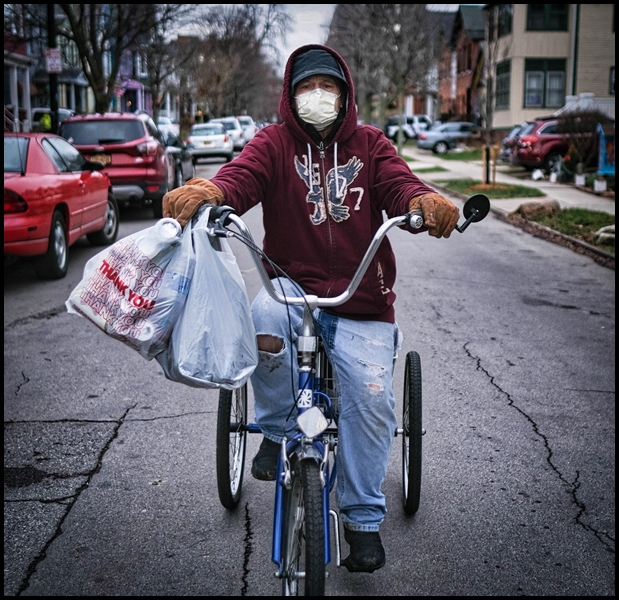 This is Garrett. We met yesterday when I was walking home and he was going through a neighbor's trash for recyclables. I introduced myself and asked if he'd like a gift card to get something to eat. I've seen him in the neighborhood before and have been intrigued by his trike. Such a simple but useful human-powered machine. Bags of recyclables are seen hanging from his handlebars but the rear of the trike was overflowing with bottles and cans as well. This is Garrett's second trike, his first was stolen two days after purchase. He had bought it new for $850, “That's a lot of bottles and cans,” he added with a smile. Going back to the bike shop and telling his story they sold him a used, lesser model, and gave him a discount. I detected a slight drawl and asked where he is from originally, “South Carolina,” he told me, “moved here for a job but that dried up.” Now he collects bottles and cans to supplement his income. We chatted about bikes for a while before parting, and as we did he hoped that I had a blessed holiday. I wished him the same. As I opened the door to my home I turned and saw him collecting more bottles and cans down the street. Peace, Garrett. Ride on, brother.