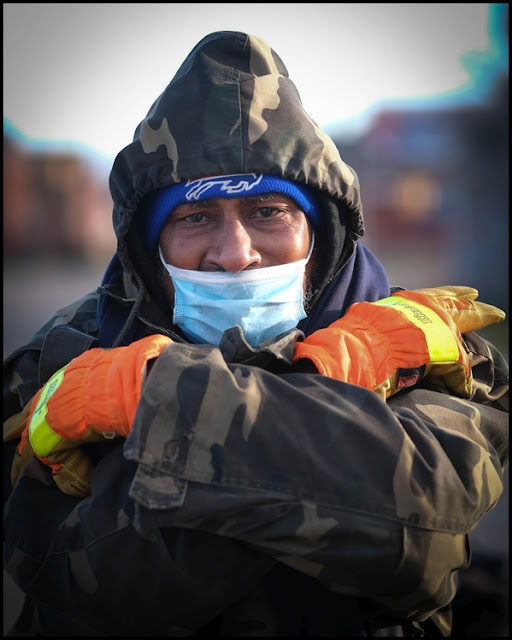 This is Gregory, we met at 8:30am this morning while waiting on opposite sides of a busy intersection. The street we were both attempting to cross leads to an expressway and drivers treat it as an on-ramp and speed like they are already on the expressway. I was standing straddling my bike and Gregory was on the opposite side with a large battered suitcase on wheels. Seeing each other, he called to me with positive reinforcement, “You got this, buddy. You can do it.” That made me smile and after crossing the street I stopped to offer him a small bag of toiletries and also a gift card to a restaurant (both of which were given to me to give away).

We only had a few minutes as I was already running late for work but Gregory told me that he was a high school basketball star and began to show me some of his moves right there on the street. I couldn't catch his image, I mentioned to him, as he was moving too fast and out of frame. So he stopped, crossed his arms, looked into the lens and said, “How’s this?” Perfect, I told him, and he was pleased with the photo when I showed him.

He also told me it is because a series of mistakes that landed him on the street. When asked where he sleeps when it is cold like this he told me wherever he can. Last night he stayed at a shelter without beds where one “sleeps” sitting up at a table.

All of us—ever single one of us—have made mistakes. I know I sure have (and continue to do so). But not all of us were dealt from the same deck of opportunity. For some, their lives have been precarious from the very start. No one aspires to be on the streets, but many end up there for so many different reasons. And once there it is incredibly difficult to get out. All of us have the same worth, whether everyone cares to admit it or not.

As we bid farewells, because now I was definitely late for work, and as I pedaled away Gregory waved his orange-gloved hand and called out, “Take care Joe, and Merry Christmas.” Gregory was a basketball star of his high school graduating class 1981, which would put him in his late 50s. Today I met him on the street carrying presumably everything he owns in a suitcase on wheels. It was 28f (-2c).