A conduit and other things... 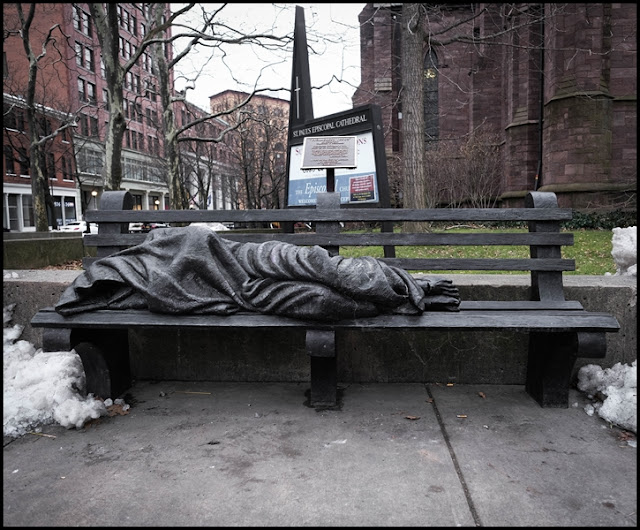 This is a three part post. Firstly, this is the Homeless Jesus statue in downtown Buffalo. It’s located behind St Paul’s Episcopal Cathedral at the intersection of Main and Church Streets. If you live in the area and haven’t seen it in person I hope you do as it is truly moving. It is by Canadian artist Timothy Schmalz and the statue has an interesting history to how it ended up here (Google it). He has another statue of a seated street-begging Jesus behind St. Francis of Assisi Church on 32nd Street in midtown Manhattan.

This said, I also wanted to mention to those that donated gift cards towards my street ministry (or more specifically, our street ministry) I have received them and have been handing them out. This brings me to the last portion of this post, something that happened this past weekend.

I had just laid a few baggies of various snack foods on the bench, which someone had given me to give away, and was packing up my bag on the bike when a woman approached and asked if I could spare some change to get something to eat. Well, I said, take a couple of those baggies and also here’s a gift card to McDonald's. Her face lit up. I asked if I could capture her image and she declined and began to walk away.

You may already know this but it is not surprising that there is a lot of mental illness among street people. I mean no disrespect to this woman but it is pertinent to this story when I say that speaking with her one can easily see that she has issues. The reason this is relevant is that as she walked away and took a few steps she turned to me in the middle of a busy intersection and called out, “Hey!” So I turned towards her. Then, lucid and with clear eyes and calm voice she simply said, “You are making a difference,” then turned and crossed the street with cars zipping past. The words and scene gave me chills.

Now here’s where some spiritual speak comes in so if you don’t like that sort of thing you’d better keep scrolling. You of course can believe whatever you’d like just as I can, and on this day I truly believe that the Spirit was speaking through this woman. When she said “You are making a difference” I do not mean she meant it singular but plural (or in Buffalonian parlance, Yous), because it is not just me it is all of us who have been involved in this. And I also must clarify that when I use the word Spirit I mean it to represent that unexplainable divinity that is in us and everything and in fact all that there is, not just the God of bible stories (please do not send me hate mail or tell me I need to be saved). On that day, when I was doubting myself for so many reasons, the Divine Spirit—the Holy Vibration which pervades all things—chose to use this woman as a conduit and use her voice to offer me (us) words of reassurance. I am convinced of this.

And this is what I was thinking as I stood in front of a Homeless Jesus statue on a cold gray day while watching a woman cross a busy street as if the cars were not there and carrying two small baggies of snack foods.