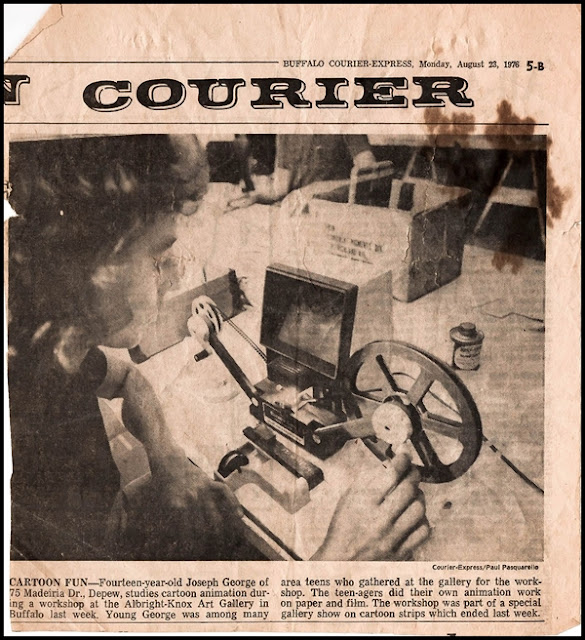 “Every child is an artist. The problem is how to remain an artist once he grows up.” ~Pablo Picasso

Yep, that’s me in 1976. Skinny little 14 year old Joey George fresh from the projects (we had just moved to a shiny new subdivision in the suburbs) and taking an animation class at the ever fancy Albright Knox Art Gallery. I don’t remember this photo being taken as I was lost in what I was doing, but do remember when it came out and my sisters teased me about it. It seems like a lifetime ago...and it was.

A couple days ago I posted a photo with a few words (a very basic poem) titled “Art Saves Me.” It was born by finding this photo recently and contemplating it. I wasn’t sure if I was going to post this but have decided to. As I get older I care less of what others think about me but more about how they, and in fact I—my thoughts and actions—make me feel. Anyhow, sometimes it just needs to come out.

When this photo was taken it was such a confusing time in my young life. Not only the usual angst that comes along with being a teenager but it was just two years after my dad had passed away and a short few before my mom would join him; at the time she was already terminally ill. So when I look at this photo what comes to mind is the title of that aforementioned post but should also title this one...Art Saves Me. It did then and it does now. When I was a child I would lay on the living room floor and draw for hours. My mother seeing this, encouraged me and also enrolled me in this program.

In high school I didn’t play a single sport nor was I engaged in after school clubs. I majored in art and it was my favorite class (do high schoolers still have majors?). I hated and dreaded gym but looked forward to art class which I could arrive to stoned from cheap 1970s weed. My mom wanted me to go to art school, and I thought about it, but instead went to culinary school, which is simply practicing another type of art.

It’s interesting, and I can only see this now years later, that I was an excellent cook but a mediocre chef. What I mean by this is that I was really good at the creative side of being a chef but not the mundane managerial side. Previous employers will likely admit that I was a much better culinary artist than I was a kitchen manager.

For many years I (mostly) gave up art when I was working as an executive chef, even photography. Yes I was practicing culinary art and also writing, but when one works as chef there is no room for anything in their life but their job. But these days, when for the first time in my life I have regular hours, I have been making art again. A lot. Some I save and some I don’t. My dining room table, which I rarely dine at, is covered in art supplies.

Sometimes when I tell people that photography is my therapy they seem to think I am joking or just being silly. I am not joking. Whether it is photography, writing, cooking, drawing, occasionally watercolor painting, or playing a musical instrument...art saves me.

So when I look at this photo I also know that I was a strange introverted but creative kid, who grew up to be even a bit stranger, still creative—maybe even more so as I grow into myself—and one that has, for the most part learned to hide his intense introversion (in today’s modern world it is easy to hide behind a keyboard and glowing screen.).

I suppose one of the reasons I am posting this is that I hope others read this and either begin or return to doing something creative. Even if you don’t think you are good at it. Even if you don’t show it to anyone. Even if you throw it out. In it you may find out things about yourself you had forgotten. Get creative; it may save you, too.

“Art enables us to find ourselves and lose ourselves at the same time. The mind that responds to the intellectual and spiritual values that lie hidden in a poem, a painting, or a piece of music, discovers a spiritual vitality that lifts it above itself, takes it out of itself, and makes it present to itself on a level of being that it did not know it could ever achieve.” ~ Fr. Thomas Merton